Swimming pools present a notoriously aggressive environment for building materials including reinforced concrete, so it is a measure of Marmox Multiboard’s inherent durability and other attributes that it has been specified for an unusually challenging refurbishment contract at a leisure centre in Peterborough.

The Regional Fitness & Swimming Centre is just a short walk from Peterborough Cathedral in the city centre and is popular with families as well as clubs and schools, attracted by the facilities and modern styling.

Unfortunately, however, the warm moist conditions had caused areas of the paintwork around insides of the very large skylights to peel. High above the water and with asbestos present in the original lining panels, this meant a maintenance nightmare. Main contractor Amey was successful in tendering for the wider project, but brought in Commercial Rope Access with its team of abseillers to tackle relining the nine rooflights: each of which measures 8.5 x 4.5 metres and is five metres deep.

Working at night, the four man team, with a fifth assisting on the ground, erected an ‘umbrella’ structure beneath each rooflight in turn to prevent any tools or debris falling into the water. Then following the specification for the upgrade, half-size sheets of Marmox Multiboard, measuring 1250 x 600 mm, were able to be fixed directly over the top of the existing asbestos based substrate, the Multiboards also offer a greatly improved thermal performance which will help prevent problems of condensation forming. The boards had been treated with one coat of EP150 on the reverse side and received a further two coats on the visible face. Despite the working time restrictions, the difficulties of accessing the upstand areas and the care required in dealing with asbestos in such a public space, the refurbishment of the rooflights was successfully completed with three months.

Marmox Multiboards are manufactured from extruded polystyrene or XPS and offer a range of positive physical characteristics in addition to being fully waterproof. They are both light to handle and easy to cut, while still being able to sustain substantial loadings if required. 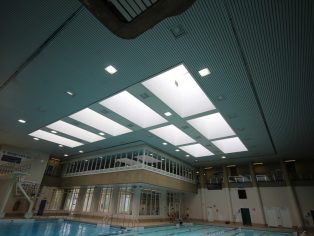