A development of 55 luxury apartments in one of the capital’s most fashionable districts is making full use of the acoustic and other performance benefits offered by Marmox SoundBoard, coupled with the manufacturer’s ubiquitous Multiboard product, in completing the floor construction.

The specification being employed for the 12-storey Ordnance Building in Dock Street, Aldgate, by the principal building contractor on site, Canbury Construction, features 12mm thick SoundBoard, covered by a 20mm thick layer of Multiboard. This high performance build-up has been installed over composite concrete structural floors and carries a finish of engineered oak in the living areas, while the bathrooms use just the SoundBoard and ceramic tiling.

An electric underfloor heating system is also being used to offer optimum comfort and efficiency for occupants of the apartments, which range in price from £550K to well over a million.

“Our role has been to erect the complete reinforced concrete structure on behalf of Sond – the main contractor – and manage the fit out of all the apartments, right up to the £1.4 million penthouse.“

“It was the decision of our in-house M&E consultant, Steve Jones, to specify Marmox SoundBoard and Multiboard for the floor build-up in order to achieve the necessary sound insulation between levels. The boards have been installed by the tiling contractor and the flooring sub-contractor, Everest Flooring, using Mapei adhesive.

While in the living rooms the 12mm SoundBoard is covered by 20mm thick Multiboards, in the bathrooms the tanking for the ceramic tiling is installed direct on the SoundBoard. It’s the first time we have used Marmox but the work has gone well and the operatives have found the boards very easy to cut and lay.”

Canbury Construction has been kept supplied with thousands of square metres of both board types through one of Marmox’s many stockists in the south-east, while the manufacturer’s technical department has provided both design input and on-site toolbox talks in order to train up staff previously unfamiliar with the products. 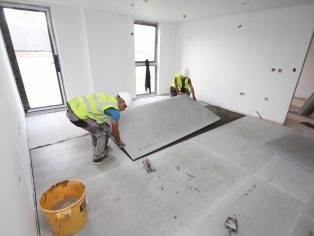