A former hotel in the Polwarth area of Scotland’s capital is the subject of a complex conversion and reconfiguration project, where Marmox Thermoblocks have been specified by the project consultants to address the critical floor/wall junction within the new extensions being constructed.

Edinburgh based architectural practice, Morgan McDonnell is renowned for both its new-build and refurbishment work across the city and ‘Old Town’. In the case of the Ettrick Hotel, its client – developer Northumberland Street Mews Ltd. Is creating 6 new residential units within the existing building plus a further 4 across the two extensions.

At the base of the new perimeter walls, the block-layers have used a total of 117 of the 140mm wide Thermoblock units each one 600mm long and 65mm high. In addition, the merchant stockist involved, St. Andrews Building and Timber also supplied a carton of 10 Marmox MSP 360 Sealant for the purpose of completing the stepped joints.

“We have specified Marmox Thermoblocks for other projects in the past and chose them in this case as part of our detailing to address the area where a thermal bridge might occur.”

“We are using Thermoblocks in new external walls inner leaves at the ground floor slab level and also at parapet level. The blocks provide us with a simple effective means of forming thermal breaks.”

Each section of Thermoblock is comprised of ultra-high performance XPS insulation, encapsulating miniature columns of concrete, while the top and bottom are covered by alkali resistant glass-fibre mesh, retaining a surface of fibre reinforced polymer concrete to facilitate bonding.

The concrete columns have a very low conductivity so do not present thermal bridges themselves and when coupled with the highly insulating XPS insulation core, a combined thermal conductivity of 0.47W/mK is achieved.

Crucially, being able to employ a defined, very low thermal transmittance – derived by thermal modelling or measurement – offers a far more advantageous result than adopting the ‘default’ figure offered in SAP which can often result in non-compliance under the Building Regulations or the Building Standards for Scotland. 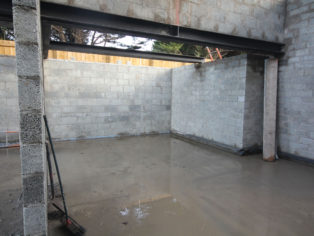