A project to transform a former brownfield site in Shieldfield into high quality student accommodation, using local construction workers, is about to begin its second phase as Metnor Group gets the go ahead for a multi-million pound funding package.

Metnor Group’s building division, Metnor Construction, completed the first phase with a 274-bedroom luxury student accommodation building and two retail units last August. Known as Turner Court, the development was fully let to students from both of the city’s Universities, as well as students studying at Newcastle College, within days of opening. Tesco and Subway occupy the two retail units on the ground floor.

Now phase two is about to begin, which will see a further 338-bedroom accommodation building developed, along with 4,500 square foot of retail/commercial space. The building is expected to open in time to accept students for the 2015/16 academic year and will be managed and operated by specialist student operator South Street Asset Management under their DIGS brand.

“Regeneration of this area of the city has always been one of our key aims when developing Portland Green Student Village. From the outset we have engaged local subcontractors to work on this project and we estimate that we have provided work for more than 150 operatives so far, through a difficult period for the North East economy – this is a strategy we aim to continue with phase two.

“Within days of completion, our first phase Turner Court was fully let thanks to its high specification and tailored facilities for students. These new residents are now helping to breathe new life into the area by spending money and time in the local shops, pubs and cafes.

“With phase two we will strive once again to produce a quality development that will meet the needs of today’s modern student, which in turn will help to bring further positive transformation to the area.

“We are very proud that we have been able to secure the funding to make this happen. Whilst banks are starting to lend against developments which are pre-let or pre-sold, it remains a challenging time to secure funding without an end tenant. The fact that Bank Leumi (UK) has again stepped forward to fund this development shows the confidence that they have in us and the project.”

Turner Court adds to the list of successful building contracts undertaken by Metnor Construction who have worked on some of the most high profile buildings within Newcastle over the last few years. The company was responsible for building the Newcastle Falcons stadium at Kingston Park back in 2002, and in recent years the Sleeperz Hotel development on Westgate Road, the Hotel du Vin development on Byker Road, the Generator Studios building on Trafalgar Street, Carliol Square office block which overlooks the Central Motorway as well as carrying out extensive refurbishment work at Slaley Hall.

Its specialist data centre division which operates from a unit in Team Valley produces Modular Data Centres which, to date, it has installed and commissioned at sites both in the UK and as far afield as France, Netherlands and Iceland, with a value of £40 million since December 2009. 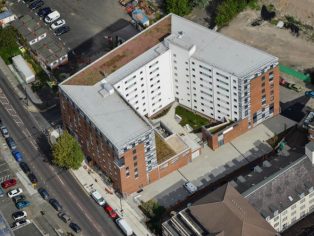