Milan has a new University Campus: “Humanitas University” presents its new home, an international centre of education and excellence

The new complex of the international faculty of Medicine, Nursing and Physiotherapy at the Humanitas Research Hospital is designed by architect Filippo Taidelli.
Three buildings for 25.000 sqm host 1.200 students from 31 countries, teachers and researchers.

Has taken place in Pieve Emanuele (MI) the official opening of the new Humanitas University Campus – International faculty of Medicine, Nursing and Physiotherapy at the Humanitas Research Hospital – a complex of buildings and greenery designed by Architect Filippo Taidelli of the FTA Studio: an articulated university campus consisting of three new buildings for about 25.000 sqm, leading to educational contents and environmental sustainability.

The complex has been designed to accommodate 1.200 students from 31 different countries, teachers, researchers, a 2.000 sqm Simulation Lab – one of the most technologically advanced and largest in Europe, high-tech classrooms, a digital library and a student residence. It is located within walking distance from the research labs directed by Professor Mantovani and from the hospital, which is a completing part of the campus as a didactic place for future physicians, nurses and physiotherapists. The total investment was about 100 million euros.

The new Campus focuses on the concept of increasing meeting and fusion opportunities between different fields of knowledge. So, it makes it possible that Nobel Prizes, Science authorities, teachers, researchers, visitors and young students find themselves eating at the same table, working in team, having a coffee together, reading in the library or relaxing in common spaces sharing experiences and knowledge.

The architecture, simple and essential, promotes functionality and the fading of borders between the didactic center, the research pole and the multifunctional hub: placed in a sort of “Triangle of knowledge” starting from the clinical aspect and ending through didactics with the lab which is the foundation of the Humanitas mission.

The Campus consists in a composition of warm-toned volumes, arranged around a green square and embedded in a large pedestrian park, inspired by the Anglo-Saxon campuses.
Located in Pieve Emanuele, at the South of Milan – between industrial hangars and the Parco Agricolo Sud park – the young private University where medicine is taught in English is alongside the Humanitas Research Hospital of Rozzano.

Next to the new Campus will be located a Student Residence of 8.000 sqm for 240 sleeping places, also designed by FTA Filippo Taidelli Architetto, to accomodate students as well as researchers, whose opening is scheduled for summer 2018.

The project consists in three volumes: a multifunctional building with canteen, library and common functions; a didactic center with classrooms, offices and the Simulation Center; the research labs, organized around a square opening on a green internal courtyard.

Large windows make the space fluid, characterized by double and triple heights and wide terraces, which can be also used as outdoor classrooms.

CONCEPT
The research for formal uniformity with the pre-existing Humanitas buildings is combined with the autonomous character of the new Campus volumes, reflecting new functions; in this way, an isolated campus surrounded by unspoiled greenery is defined.

POSITION
The campus is located in central position with respect to the general masterplan, allowing for great flexibility in case of future expansions and ensuring a direct physical and visual connection with the pre-existing hospital.

FORMAL COMPOSITION
The volumetric composition of the Campus resumes the typology of the cascina (local farm) and the introvert character of its volumes, harmoniously collected around the courtyard; this concept is overcame by the overlapping of volumes that give dynamism to the complex. The new courtyard is in fact the “square”, welcoming the three glazed entrances of the buildings.

GREENERY
The project plans to extend the greenery of the Parco Agricolo Sud park among the new buildings through several systems of native species and to increase and enhance the spontaneous vegetation as a connective tissue that links the campus to the rest of the hospital complex.

FAÇADES
The formal principle behind the project is based on a composition of polychrome volumes decomposed into three different warm and material coatings, highlighting the dynamism of the complex, generating a proportionate livable relationship with the square and making the façade curtain more vibrant depending on lights.

The opaque façades are only interrupted by the windows, characterized by white asymmetrical frames, and the large glazed entrance.

COURTYARDS
The heart of the main building is represented by a large patio covered by a shading structure that allow all the floors to receive light and natural air, avoiding glare and / or overheating issues in the garden and indoor. The court amplifies as a kaleidoscope the dynamism of the activities facing it and visually connects them through large windows that also allow a direct visual link with the surrounding greenery.

The transparency of part of the volumes permits visual continuity both horizontally between indoor and outdoor, and vertically between the different floors and activities through the spacious triple-height halls, holding the main vertical distribution.

INDOOR
Inside the buildings, the volumes game is re-created by polychrome masses arranged on different floors which, like an elegant pinstripe, heats and features the different spaces.
This colorful sound-absorbent covering, only interrupting at the classrooms doorways level, fulfills the fundamental function of ensuring acoustic insulation of these open and complex spaces. As a background, a uniform floor in neutral tones simulating the ceppo, a local natural stone, proceeds like an endless carpet even in the outdoor walkways.

SUSTAINABILITY
The green campus is not limited to landscaping but is the demonstration of a special attention to environmental issues that makes possible a significant reduction in energy consumption and an increase in users comfort.

The application of these climatic strategies co-operating with active systems such as groundwater heat pumps, low temperature radiant panels heating and installation of photovoltaic panels in the roof, have obtained the top energy class CENED A3.

Buildings orientation and their shape with degrading volumes to the South, helps with increasing sunlight ingoing in summer and reducing heat dispersion in winter, while the inner glazed courts guarantee the maximum amount of natural light and continuity between indoor and outdoor, limiting the use of electric lighting.

The spaces have been conceived according to the most modern standards in technology and in comfort. 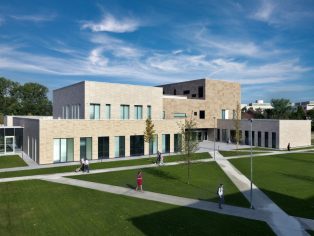 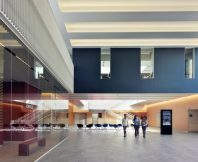 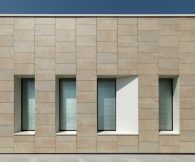 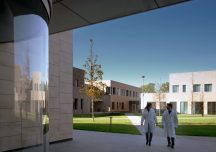 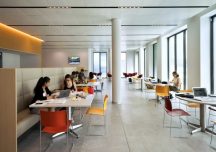 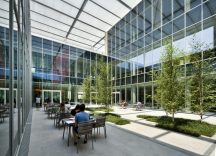