A large plot of land just outside Oxted in Surrey is being sensitively redeveloped by award-winning developer Millgate. The nineacre site has an interesting background starting life as The Passmore Edwards Convalescents Home, connected to the Charing Cross Hospital. The house was built by Mr J Passmore Edwards and opened in 1896 by King Edward VII when he was the Prince of Wales.

The grade II listed property later became a Marie Currie Research Institute, pioneering revolutionary cancer treatments until its closure in 2010. The site was subsequently purchased by Millgate who have been granted planning permission to transform the property into a boutique residential development.

Respecting the character and history of the property, Millgate will be retaining the derelict building’s façade as well as extending to the rear in order to create six luxury apartments. A further three detached homes are being developed on this spacious site, creating fabulous new homes in the area.

In addition to the prestige of the site, Trevereux is also a milestone project for Millgate as this will be the first time in the developer’s 25 year history that they have deviated from their classic design style and chosen to include a contemporary modern home on the site.

Trevereux in Oxted, Surrey will become Millgate’s first ever mixed vernacular development due to be completed by Spring 2014.

Greg Meier, Chief Architect at Millgate for over 13 years, is leading the team on this project and explains his vision for this cutting edge contemporary family home:

“As a company we were keen to experiment in this different line of architectural design. It gives an interesting concept of blending traditional house designs with contemporary design on one site.”

Indeed Millgate’s ethos is about creating homes that will evoke emotion, desire and connection – even before you have stepped over the threshold. Millgate Chairman

“Over the years, I’ve surrounded myself with people who share my obsession, who constantly challenge the ordinary, who are driven by perfection. Our passion and expertise is what guarantees our homes and demonstrates the very best in British house building.

“This desire to continually push their own boundaries is why they have designed a modern home for a family who are looking for a dynamic style of house – not just the norm.”

“Making a simple design look interesting and impressive has been part of our challenge. We have incorporated a more contemporary feel into the internal and external specification and finishes. My favourite feature is the clean, crisp lines of the building, created by the contrast in colour between the light render and darker grey windows and deep overhanging soffit and fascias.

“For a really big wow factor we have designed the entrance hall with a double height internal space which includes a two storey high glazed window. The open plan ground floor living area with large glazed external sliding doors opens up the superb far reaching views across towards the South Downs.”

The development sits just outside Oxted in an area known better as Limpsfield Chart which boasts a charming pub and an ancient church, yet this is a quiet peaceful area is less than a 5 minute drive to the high speed rail link at Oxted which races into London Bridge in at little as 29 minutes. The site also butts up to the Greensand Way – a 108 mile path meandering through Surrey and Kent.

Trevereux is located within a designated area of ‘Outstanding Natural Beauty’ on the ridge of the Kent-Surrey border known as High Weald. The beauty of this area contrasting with the bold lines and contemporary feel of this house new house will be unusual for the area and is certainly a house that will attract much attention. 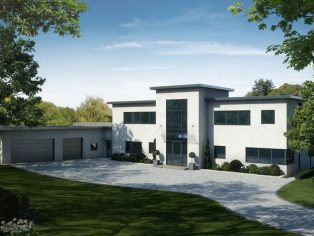