Jonathan Mizzi picked up the ‘Outside’ Award last night at the Restaurant & Bar Design Awards ceremony in King’s Cross, London. Together with his team, Mizzi was recognised for his breathtaking copper kiosk – Colicci Coffee – at London’s Westfield Stratford shopping centre.

Mizzi Studio’s design for the Colicci kiosk is a mini-manifesto of sculptural form and material manipulation. Its tour-deforce is a swelling copper roof, made using a combination of 18th century copper sheathing and computer-aided design – it wholly represents Mizzi Studio’s strength in creating visual statements that are uniquely innovative, and that push modern manufacturing techniques beyond their conventional boundaries.

Since its opening, the kiosk has not only captured the imagination of the countless Westfield shoppers who have been drawn to its radiant presence, but also caught the eye of industry experts – catapulting Mizzi Studio into a triumph of award nominations, wins, and critical recognition. And it all began with a brief from a client who wanted statement-making design.

“We took this leap of faith together – it was a super ambitious project, and it paid off,” said Rob Colicci, director of the Colicci brand. “Jonathan and his team took our brief and converted it into a piece of architecture that defies industry norms. I cannot thank the team enough for their work and shared vision.”

The Restaurant & Bar Design Awards is in its ninth year and has reached global recognition as the foremost competition dedicated to the design of food and beverage spaces. This year’s judging panel included experts from store developers to design critics, entrepreneurs and world-class chefs; with representatives from high-profile brands including Ralph Lauren, Domus, Architectural Digest, Jamie’s Italian, St. John Restaurant, and many more. Mizzi Studio’s Colicci Coffee kiosk took home the award for the Outside category.

The café’s innovative design was a direct response to the client’s desire for a revolutionary structure that would transform the conventions of kiosk design. Aside from the grand sculptural gesture provided by the copper roof, the café is designed with maximum glazed openability, offering warm protection from all weather conditions in an outdoor setting. Its transparency allows shoppers to glance into the kiosk’s paired-back, contemporary interiors, which provide a visual respite to the surrounding fastpace environment.

Designed to mimic the mouth of an orchid, the captivating entrance and roof is shaped to lure visitors in to an immersive copper cocoon – converting the grab-and-go culture into a sensory, fun, and warm user experience. The copper has been sealed with a matte, clear lacquer to preserve the material’s textural history, and retain its rich lustre and reflectivity. The combination of the kiosk’s neo-futuristic form, deep amber hues, and polished surfaces results in a functioning café that also acts as a piece of dramatic public sculpture.

“The Colicci Kiosk is a great example of what Mizzi Studio can bring to the restaurant, bar and hospitality industry. We are so excited, and feel so privileged, to be able to continue creating designs that inspire people and change conventions in architecture. We are looking forward to unveiling more exciting and boundary-pushing projects as we move into 2018!” 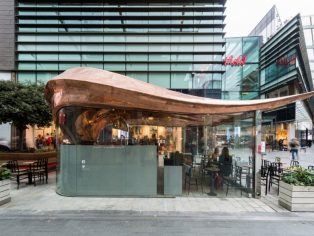