Mosaic Architecture + Design, one of Scotland’s most experienced practices, has completed a lavish refurbishment of Hutchesons, the flagship outlet of Glasgow-based restaurant group Rusk & Rusk with the introduction of The City Grill and 158 Club Lounge. Now known as Hutchesons City Grill, the popular venue has a new name, new menu and a new look.

Mosaic has created a bespoke interior that complements the beautiful original features of the building. The main restaurant has been transformed to create a bustling city centre grill while the ground floor bar is now a stylish, boutique speakeasy renamed as the ‘158 Club Lounge’.

“Having worked with Rusk and Rusk previously on The Spanish Butcher, we were commissioned to rebrand and refresh Hutchesons. The former Hutchesons’ Hall is an iconic venue and a renowned piece of architecture in its own right, so we were delighted to be asked to work on it.

“The restaurant is housed in a listed building with a beautiful ornate interior. Our brief was to tie in with the relaunch and rebranding, improving the ambience of the space, including enhanced lighting, fixed and loose seating and tables, decoration, specialist finishes, new cabinets and waiter stations and, importantly, space planning the new layout to improve workflows and the customer experience of the venue.

“It’s a very traditional interior, which we sought to modernise without disrespecting the integrity of the building. Consequently, much of the lighting was incorporated into the fixed seating so as not to impact on the period plasterwork. Our approach was to use decoration techniques to bring some of the old period features back to life. Elements like the fireplace with ornate carving were once more given prominence.”

Commenting on the refurbishment, James and Louise Rusk of Rusk & Rusk, said:

“Mosaic’s professionalism is second to none; the energy and enthusiasm in which they approached the Hutchesons project was exceptional. We always enjoy collaborating with Mosaic and, time after time, they deliver a fantastic standard of service.”

Hutchesons’ Hall is an early nineteenth-century building in Ingram Street. The current building was constructed, as Hutchesons’ Hospital, between 1802 and 1805 to a design by the Scottish architect David Hamilton. In 1876, the architect John Baird was commissioned to refurbish the hall. This work heightened the structure and added a feature staircase.

The building fell into disrepair and had been empty since 2008. In 2014, having undergone a £1.4 million refurbishment, it was restored by Rusk & Rusk and opened as a three floor dining venue. 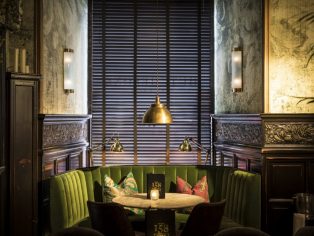