The winners of this year’s Surface Design Awards have been announced, unveiling some of the best projects from across the globe which feature innovative and exciting materials and surfaces.

The Museum of Art, Architecture and Technology (MAAT) in Lisbon by AL_A was announced Supreme Winner as well as winner of the Public Building Exterior Surface.

The design builds upon Portugal’s rich tradition of craft and ceramics, almost 15,000 three-dimensional crackle glazed tiles articulate the façade and produce a complex surface that gives mutable readings of water, light and shadow. The project was described by Jo Littlefair as “promoting art and architecture just by being there”. Making the win all the more impressive, AL_A were up against spectacular entries from Foster &amp; Partners, Heatherwick Studio and The Manser Practice.

In several categories, the best in applied surface design was put forward by a number of brilliant architects and designers including Coffey Architects, Giles Miller Studio and Studio Octopi amongst others. 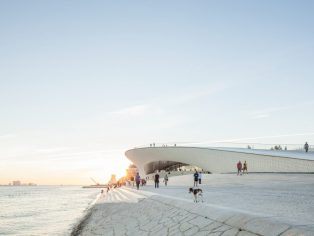