Need for a planned approach to drainage maintenance

When it comes to drainage maintenance, many organisations are still adopting a shorted-sighted strategy which is costing them in the long-term. Contractors and facilities management professionals need to make the case for a planned approach, as Clark Williams of Jet Aire Services explains…

At one point or another in our lives, most of us have received a call from someone trying to sell us upgrades or add-ons to our insurance. Our decision is often based on a simple calculation of odds: will I ever need them? If the conclusion is “probably not” then we often opt to take a chance to avoid the up-front cost of a belt-and-braces policy.

Many organisations are following a similar thought process when maintaining their drainage. Their choice boils down to planned maintenance vs reactive maintenance. The former involves a set cost for a comprehensive programme, scheduled periodically to prevent future issues, while the latter involves a (lower) budget put aside to deal with any potential problems should they arise.

Comparing this choice to buying home or car insurance might be a somewhat crude analogy, but the fundamentals are the same: based on a basic risk-cost analysis, they decide to cross their fingers and avoid the immediate expense.

It’s a mindset fraught with problems, largely because their analysis ignores a range of potential factors and variables. First and foremost, it overlooks that fact that, as a business-critical asset, the impact of drainage failure has cost implications far beyond the expense of a reactive fix, which is often viewed in isolation. Dealing with a drainage failure is rarely a quick fix. It is usually a lengthy process leading to protracted disruption to a business estate and its day-to-day operations. A factory could be shut down for weeks, causing extended downtime and wiping out productivity. A flooded supermarket could be closed for a month, making a huge dent in store revenue. If a company’s building insurance is activated, this is likely to increase future premiums. In a worst-case scenario an insurer could deem a reactive strategy to be insufficient contingency for drainage failure, causing costs to spiral. These kinds of impacts are too rarely factored into calculating the potential cost of a reactive strategy.

One of the most commonly overlooked calculations is the higher rates which are often involved in calling upon reactive services. If the issue is urgent– and when a drainage failure becomes obvious, it invariably is – then the necessary short response time comes at a premium. In contrast, a planned approach allows suppliers to schedule their works well in advance at times and dates which minimise rates. The fast turnaround of operations required by urgent reactive works also presents potential Health & Safety issues. All the standard procedures must be observed, from method statements to risk assessments, but circumstances demand their completion within a much shorter period. A more compressed schedule inevitably increases the possibility of a mistake. Regardless of their ability, no professional is immune to extreme and unreasonable time pressures.

Companies often pay little heed to the maintenance of pipework because its deterioration is out of sight, but the invisibility of its growing risk is all the more reason to apply a methodical approach. The longer an unseen drainage weakness is left unaddressed, the greater the severity of the system failure when it eventually makes its presence felt. If a damaged pipe is allowed to leak for a lengthy period, the ground will eventually sink through saturation. If that happens, the foundations of a building could subside, and the financial foundations of a business could be fatally undermined.

Over the years we have encountered various businesses that opted for a reactive approach and paid a heavy price. In one extreme example, a manufacturer required repairs to be completed during live production to ensure zero downtime and an uninterrupted supply chain. To meet that objective, we had to create a lengthy diversion within the drainage network and construct an auxiliary pipe route to enable continual production whilst remedial works were carried out. It hardly needs stating that an elaborate makeshift solution like this is the opposite of cost-effective. Having seen the deterioration of their drainage system at close quarters, we estimated that commencing a programme of planned maintenance approximately eight years prior to the problem would have saved the company costs totalling well into seven figures. It’s certainly a cautionary tale.

Any organisation that has experienced such misfortune will no doubt be a convert to a policy of planned maintenance. When it comes to maintaining the free-flowing infrastructure of a building, drainage is a fundamental element which should be subject to proactive maintenance on a cyclical basis.

Contractors have a proactive role to play in changing the way organisations think about their drainage needs. We should present ourselves more as a consultancy service than simply a remedial service. We must demonstrate that investment in the former can drastically reduce the cost and time involved in the latter. Organisations tend to assess their estate maintenance with reference to the age and square footage of their building, but the intensity of footfall is often a more pertinent factor. A sports stadium, for example, will require more frequent maintenance to prevent drainage failure in both the long-term and the short-term.

In the manufacturing sector, the nature of the product can significantly heighten risk. For example, breweries, soft drinks manufacturers and chemical industries all have products with particularly abrasive properties which accelerate the decay of pipes. We were once called upon to address multiple leakages at a drinks factory with a drainage system in a state of advanced decay. The company’s sugary produce had saturated the ground and polluted the surroundings. It was an example of another potential pitfall: environmental risk.

Over the years there have been some eye-watering fines from the Environmental Agency when businesses and utility companies are found responsible for unnecessary pollution and damage to local wildlife. Such cases deal a severe financial blow in the immediate term, but they also inflict a cost to reputations which can take decades to recover.

This is the kind of industry knowledge which drainage contractors can impart in a consultancy capacity, using their experience to help clients to make accurate risk assessments. Providing that consultancy can be the foundation of an enduring business relationship – if contractors are able to do their homework and illustrate a reliable risk-cost analysis up-front, comparing a planned v reactive approach based on a range of probabilities, they can position themselves as a preferred supplier for a long-term programme of planned maintenance. A similar relationship can be established with facilities management companies as drainage contractors form one division of a multiple asset management contract. It makes sense for Facilities Managers to outsource to specialists with established credentials and a full understanding of relevant standards required for drainage maintenance and construction, including BS EN 1610 together with BS EN 805. Drainage is an aspect of asset management that needs particularly stringent Health and Safety Compliance, so decision makers can ill afford to cut corners on expertise.

Returning to the insurance analogy, the most fundamental point to make is that money spent on planned maintenance should never be viewed as a contingency. It is better to see it as an investment that will extend the lifespan of an asset, maintain its optimum performance and ultimately reduce its running costs. 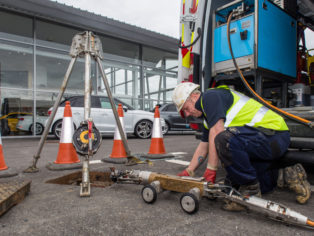