The announcement follows the retirement of co-founder and director Ian Potts in December. The five directors say the change in leadership marks a ‘new chapter’ for the 33-year-old Plymouth based firm.

Dale Beeson grew up in Saltash and joined ADG in 1997. He has played a key role in ADG winning new clients in and around his home city of Exeter, including the University of Exeter and Exeter Mathematics School. As well as developing masterplans for a number of major projects, Dale specialises in sustainable buildings, having created innovate designs for The Village at Watergate Bay, which has environmental sustainability at its core.

Bob McDonald joined ADG in 1999, after working in his native Belfast and in Glasgow. He is the central architect in residential developments at the five-phase Mount Wise ‘village by the sea’ development. Other career highlights include the Peninsula Dental School building and the redevelopment of 200-year-old Buckland Court on Dartmoor.  He was also the lead architect on the Azure development, next to the former Grand Hotel on Plymouth Hoe.

Patrick Deigan grew up in Penzance and worked in London for 13 years before returning to the South West to join ADG in 2005. His high profile projects include the redevelopment of the Godolphin Inn and the Royal Yachting Association training facility in Portland, which was developed for the 2012 Olympics. Patrick’s expertise has helped the firm put sustainability at the heart of many of its designs, including incorporating ‘Passive House’ principles to many of its residential projects.

ADG employs a team of 21 at its offices in Plymouth and is planning to grow its team over the next two years.  The firm’s current projects include the STEM building at City College Plymouth, the third phase of the Mount Wise ‘village by the sea’ development, a St Austell Brewery project on the Isles of Scilly, the energy-efficient commercial development for Plymouth – St Andrews Court, a number of developments across the South West for Nuffield Health and a growing portfolio of housing projects.

“I would like to extend a very warm welcome to Bob, Dale and Patrick as Directors at ADG. Over the last few years, they have become the main link with most of our clients, ensuring we exceed their expectations. They have also been behind many of the design awards that ADG has won.”

“It has been a privilege to see each of them progress in their careers at ADG and we look forward to working with them as we enter this new phase.”

“Over the last three decades, ADG has made its mark on the South West and further afield. With the change in directorship comes the opportunity to further strengthen our legacy. Our three new directors share our commitment to the city of Plymouth and the South West and are dedicated to supporting the region’s continued growth and prosperity.”

“We are aiming to bolster our already strong team by employing talented, ambitious people who want the opportunity to make a difference.”

“ADG will continue to harness the depth and breadth of our expertise: a strategy that has ensured a continuous stream of work during both good times and lean. We will also strengthen our technical knowledge, including honing our skills in ultra low energy design and using cutting edge software.”

“This is a very exciting new chapter for ADG.” 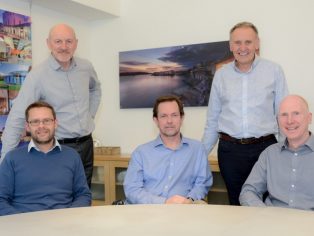