Tensar International, a global leader in ground stabilisation and soil-reinforcement technology, has designed and provided products for the creation of a 15 meter high slope on the site of a new retail distribution warehouse in Crick, Northamptonshire.

Appointed to the project by site contractors Buckingham Group Contracting, Tensar delivered its TensarTech® GreenSlope® Earth Retaining System for the highest single lift slope that the company has designed in the UK. Located near junction 18 of the M1, the site is home to global membership warehouse club Costco’s new purpose-built distribution centre.

Designed to match the ground level of the site’s boundaries and act as a screen to retain the area’s scenic appearance, the green-faced slope stands three times taller than average, with a total area of 3,700m². By building to this height the Tensar design maximises the use of site-won fill, eliminating the need to remove excavated material from the construction area, reducing on-site traffic and lowering project costs.

Carrying out the works, subcontractor Crosskeys Structures installed the GreenSlope® system, which consists of a stable, reinforced soil mass made up of site-won fill supported by horizontal layers of Tensar’s uniaxial geogrids.  The slope also features durable steel mesh facing units, linked at the face to the geogrids using high efficiency Tensar bodkins.

“It’s an honour to have been appointed to such a large-scale project. Having worked with us in the past, Buckingham Group Contracting knew that the design we produced would be suitable for this project.”

“By using site-won fill, it is possible to keep project costs down, removing the need to deliver granular material to site while also eliminating the cost of removing materials that will be excavated when earth works are carried out. By choosing this approach, Buckingham Group also minimised traffic on local roads” 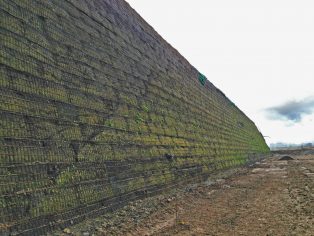