A new £3.6 million community fire station, training facility and headquarters for Omagh’s firefighters has become fully operational, providing improved safety for the people of Omagh and the surrounding district.

The station was designed by HLM taking inspiration and lessons from some of the best fire stations and training facilities across Ireland and the UK – it represents the first of a series of innovative prototypical stations providing community transparency and a strong identity for the service that can expand and contract reflecting each site and operational requirements.

HLM led workshops with a cross-section of Northern Ireland Fire & Rescue Service (NIFRS) operational and local station staff, including district and area commanders, Health Estates Investment Group, trainers and, of course, the local firefighters themselves to develop an operationally lead design. The design also addresses specific gender considerations thanks to a female firefighter’s workshop, reflecting the changing nature of the NIFRS.

The result is a district headquarters with a fire station housing six fire appliances. This presents a new piece of civic architecture to the NIFRS building stock and to this area of Omagh. There’s a community fire safety centre, district and station training facility, dedicated transport and engineering workshop. The station, while providing the key operational and administration hub for the district, also has a silver command facility offering operational resilience for major incidences across Tyrone and Fermanagh.

Steven Lennon, Associate at HLM who lead the design, said:

“The fire service is everyone’s ultimate insurance policy. You pray you’ll never need them, but when you do, you want to be sure they’re as well equipped and well trained as possible. We’re proud to be part of such an important project, creating the facilities that help the specialists prepare for worst-case scenarios – and save lives.”

HLM has designed eight further new stations plus a number of refurbishments across Northern Ireland delivered as part of the NIFRS framework including Rathfriland Station that was completed in August 2012. 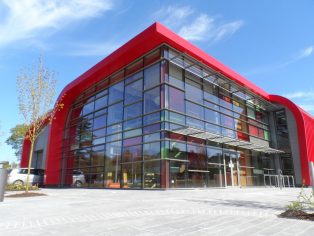