Construction of West Norwood’s brand new £4.9 million state-of-the art fire station has reached a milestone with the completion of the main structure of the building now completed.

A topping out ceremony was held on Wednesday 26 March to mark the occasion.

Once it is fitted out, the new building will provide a modern working environment for fire crews, with room for modern fire engines and training facilities, including a drill tower. The station will also be kitted out with community facilities that will allow members of the public to more easily access vital life saving fire safety advice from firefighters.

“This brand new fire station is excellent news for the local community and with the main structure of the building now finished, we’re well on the way to completing the project.

“The current station on Norwood Road has served residents well for 100 years but it no-longer meets the demands of a modern fire and rescue service. Once completed, the new station on Knights Hill will provide us with facilities fit for the 21st century. It will also reinforce our commitment to providing fire safety advice to Londoners by providing facilities accessible to the community.”

“We’re thrilled to have been selected as the delivery contractor for this project. The topping out ceremony marks an important milestone and we’re on track to complete the building so that it can open during the autumn.”

Topping-Out ceremonies are a tradition in the construction industry that mark the structural completion of a building. They will usually take place when the highest point of the building has been reached, and are an opportunity for all those involved in the project to toast to the success of the building so far.

In addition to the new fire station being built in West Norwood, nine of the Brigade’s ageing fire stations are also being rebuilt as part of a £51.5 million Private Finance Initiative building programme. 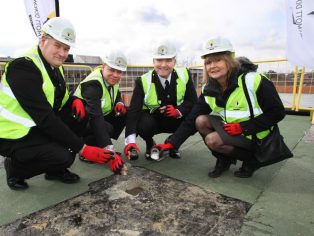