NFB Business & Skills, the training and development arm of the National Federation of Builders (NFB), in conjunction with YORbuild, held the first of a series of ‘BIM: The YORbuild Way’ events in Leeds on Monday 16 June 2014.

The process of re-procuring the YORbuild ‘2’ framework is due to commence later this year and the series of four workshops being held across Yorkshire were jointly developed by the NFB and YORbuild to facilitate feedback to the proposed content of the framework from those looking to be included and selected, with an emphasis on building information modelling (BIM).

The event, held at the Leeds College of Building, brought together clients, architects, consultants and contractors for a consultation on the forthcoming framework which proposes to include BIM as part of its selection process.

As well as gaining an insight from the YORbuild team into what the new framework would include, participants at the workshop also heard about the progress of the NFB’s BIM Exemplar Programme, along with details of additional programmes within its CITB supported projects available to those looking to implement BIM practices and process within their organisations.

Completing the circle of process and technology, participants were able to watch a live demonstration of BIM software and tools from guest speaker James Parsons-Moore of Micro Cad.

The inaugural event at Leeds was a great success and feedback from those who attended has been extremely positive. Victoria Voase, of NFB member company Voase Builders said:

“I thought the format of the day was excellent – to the point and productive. As a company we have been discussing the release of YORbuild 2 for a long time now and debating what it will contain/entail.

“The event helped to de-mystify some of those questions…. I think everyone felt included in the session and it was good to feel that there was the opportunity to put forward ideas that may contribute towards the YORbuild 2 release.” 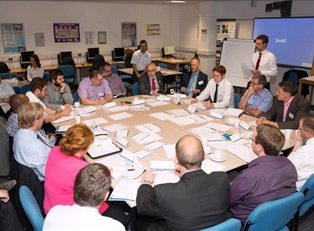