NLA announces London’s best architectural projects of the past year

New London Architecture (NLA), the capital’s leading organisation focused on architecture and the built environment, has today announced the shortlist for the annual New London Awards.

London’s only awards to celebrate new projects with the highest architectural quality as well as an outstanding contribution to the capital, the New London Awards features projects both built and in design – from a bridge across Regent’s Canal, to a church in Hackney and a Centre for Children with Cerebal Palsy in Muswell Hill.

Category winners and the Overall Winner will be announced at the NLA Annual Lunch at the Guildhall on the 7 July.

Special awards will include the New Londoner presentation to the person who made a significant contribution to the capital in 2016, last year awarded to Zaha Hadid; the Mayor’s Prize for the project that has most creatively contributed to London’s economy; and the Ashden Prize, awarded to the most energy efficient project.

An exhibition of all shortlisted schemes will open at the NLA Galleries at The Building Centre, WC1 from 3 June.

This year, for the first time, Londoners will be able to select their favourite, culminating in the announcement of the People’s Choice Award in conjunction with the London Festival of Architecture. Votes can be cast throughout June, in person at the New London Awards exhibition, or via Twitter using #NLAwards16 @NLAlondon

The regeneration of King’s Cross continues to make waves with several projects in the area making this year’s shortlist, including Coal Drops Yard by Heatherwick Studio; German Gymnasium by Allies and Morrison and Conran and Partners; and The Plimsoll Building by David Morley Architects, all receiving nominations.

Housing provision continues to be a critical issue for London, with varied residential projects featuring prominently on this year’s shortlist. The regeneration of the South Kilburn estate is marked by Alison Brooks Architects’ Ely Court project, whilst the Somerleyton Road project proposes the creation of over 300 homes in Brixton, together with a range of community facilities – designed by a consortium of architects: Metropolitan Workshop, Haworth Tompkins, Mae, Foster Wilson Architects and Zac Monro Architects.

Creative and innovative workplaces feature heavily on this year’s shortlist, as London-based companies seek to attract and retain the capital’s best talent within an increasingly expensive city. They range from the conversion of listed buildings to newly built spaces, as demonstrated by the redevelopment of Triton Court on Finsbury Square which resulted in the creation of Alphabeta by Studio RHE, whilst Piercy&Company’s Turnmill now occupies the Farringdon site of the infamous Turnmills nightclub.

New insertions to London’s existing fabric is particularly apparent within the Conservation & Retrofit category, which includes SODA’s restoration of a Dean Street townhouse to create a new outpost for Soho House, and the addition of a 3-storey glass dome to create a striking new workplace within the Grade II-listed Ford garage in Shepherd’s Bush by ColladoCollins Architects.

The rude health of London’s burgeoning arts sector is reflected by the strong offering in this year’s Culture and Community category. The shortlist includes Picturehouses in both Crouch End and East Dulwich, both by Panter Hudspith, libraries in Camberwell and Willesden Green, by John McAslan+Partners and Allford Hall Monaghan Morris respectively, alongside larger institutions such as the new Gagosian Gallery in Grosvenor Hill by TateHindle.

The Education category features primary, secondary and tertiary institutions across the capital, and demonstrates an innovative sector working in the constraints of funding cutbacks. From Lyndhurst Primary School by Cottrell and Vermeulen Architects, to Channing School by BuckleyGrayYeoman and Richmond Adult Community College by Duggan Morris Architects, the list reflects the development of both public and private centres of educational excellence for all ages.
London’s world-renowned retail and restaurant scene is also celebrated by this year’s shortlist, with varied nominations demonstrated by Chicken Town – a non-profit outlet in a converted fire station created by Assemble Studios – and The Borough Market Cookhouse by DLA Architects. 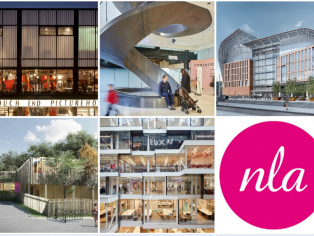 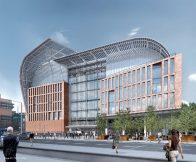 The Francis Crick Institute by HOK 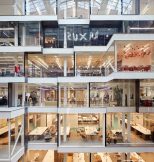 The Wellcome Collection by WilkinsonEyre, AOC and The Reading Room © Craig Sheppard 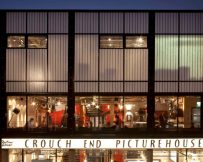 London Centre for Children with Cerebral Palsy by PH+ Architects