Ian Ritchie Architects’ ingenious project for the Royal Academy of Music in a particularly challenging historic London location is defined by its roofline of Nordic Blue copper, a material that the architects have been exploring for over a decade.

Hidden behind the listed facade of the Royal Academy of Music’s Edwardian premises, surrounded by Grade I and Grade II listed buildings and located within the Regent’s Park conservation area, two distinct, outstanding performance spaces have been designed by Ian Ritchie Architects. Seamlessly integrated within the historic site, the project is expressed by facades and roofs clad in Nordic Blue pre-patinated copper from Aurubis.

Nordic Blue is a factory-applied patina developed with properties and colours based on the same brochantite mineralogy found in natural patinas all over the world. In marine climates, the natural copper patina contains some copper chloride giving it a blue-green colour, emulated with Nordic Blue. As well as the solid patina colours, other intensities of patina flecks revealing some of the dark oxidised background material create ‘Living’ surfaces.

“I grew up in Brighton and have always been fond of the copper roofs there, naturally patinated a turquoise blue by the sea air. Our interest in Nordic Blue copper goes back to 2004 and instigated research and development carried out by its manufacturers for a previous project. For the Royal Academy of Music project, Nordic Blue Living 1 provides just the right hue which will continue to develop naturally over time.”

Despite the complexities of the constrained site into which the myriad of functions of a modern opera and musical theatre were to be introduced, the copper-clad project was unanimously granted planning permission and listed building consent at the first submission, fully supported by all officers, English Heritage and the St Marylebone Society.

Designed for both opera and musical theatre productions, The Susie Sainsbury Theatre sits at the heart of the Academy. Within the old concrete walls, the Theatre incorporates 40 per cent more seating than previously through the addition of a balcony, as well as a larger orchestra pit, a stage wing and a fly tower. Above the Theatre, and acoustically isolated from all other buildings, the new 100-seat Recital Hall provides a further 230m2 of space.

Creating a visual and physical link between the old and new buildings is the Recital Hall’s new glazed lobby, which is primarily accessed from the main stairway and also by a glazed lift. The new light wells reveal the previously concealed Grade II rear facade, in which bricked-up windows have been reopened. Both of these beautifully finished, acoustically diverse spaces can be accessed independently and complete a suite of facilities for the Academy’s ambitious student body and world-class teaching staff and for public performances. 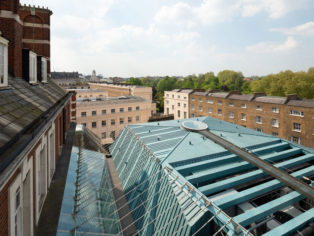