Although Durham University is one of the oldest universities in the UK with a medieval World Heritage Site at its heart, it is a modern and forward-looking University where world class research is conducted and where the new buildings continue the tradition of important and innovative architecture.

In 2014 it became clear that two of the institution’s buildings, the Higginson Building, home to the University’s Department of Engineering and Computing Sciences and The School of Biological and Biomedical Sciences, were in need of refurbishment to ensure that the environment and facilities met the needs of the University’s students and staff.

The University’s estate team approached Thorn for advice and guidance as to how the outdated T8 switchgear could be updated and if a new system could also incorporate some level of lighting control, something that was completely lacking in the old lighting configuration.

It was not a straightforward upgrade as Steve Gleghorn, Key Account Manager at Thorn, explains:

“Some ceilings had concealed metal tiles and the luminaires were held in via bespoke fixings. It became apparent after a site visit that the best option would be to make custom gear trays and optics, and to retain the original luminaire carcases. The luminaire bodies were removed, and then delivered to Thorn’s factory in Spennymoor, where the control and optics were developed by a joint team from Tridonic and Thorn in our Custom Product Department.”

This wasn’t the only problem that had to be overcome as other ceilings were made of plaster board out of which the lighting apertures had been cut and which could not be altered.

Thorn engineered a number of special Duoproof IP65 LED luminaires with customised external dimensions and Tridonic LED light engines, unlike the company’s standard modular T5 version. Approximately 400 LED luminaires were supplied in total for for this project of which 50 percent required special engineering.

“The Thorn/Tridonic team knew we were up against a tight schedule as the work needed to be completed before the start of the new academic year in September when the students would be back in the labs. We were delighted that the design and manufacturing departments were able to complete the entire process from design, engineering and final testing in the 8-10 week window,” said Lee Patterson, Electrical Building Services Engineer, Durham University.

“We were able to draw upon our expertise and experience and provide the University with their own bespoke solution. They have the solution they needed and we have added to our own knowledge which can be utilised in future projects that may be facing similar challenges.”

Further savings to the input supply power were created by the introduction of window row daylight dimming with absence control PIR and microwave detectors. This gives the user up to 60 per cent of additional energy saving by ensuring the correct light level regulation, automatically switching the luminaires when unoccupied in the working environment.

Now that the academic year is well underway, the University’s Department of Engineering and Computing Sciences will review both the energy savings brought about as a result of the new system and also assess the improvement in the quality of light. Tridonic’s initial estimates were that the new LED based fittings would provide energy savings in the region of 60-75 per cent.

In addition both the staff and students that use the laboratories on a daily basis have commented on the vastly improved quality of light in the laboratories. Lee Patterson said:

“The new bespoke lighting scheme has received positive feedback from the departments. The installation works well creating an aesthetically pleasing lighting array which is sympathetic to the existing unchanged structural environment. The new scheme offers significant improvement in terms of energy, lighting quality and levels, with emphasis on teaching spaces, thus contributing to an enhanced student experience.”

A final commercial consideration and one that had a particular attraction to the University was Tridonic’s five year warranty on the entire refurbishment. So not only are they saving on energy and maintenance, but should anything fail there will be no unexpected repair or replacements costs to manage in the foreseeable future. 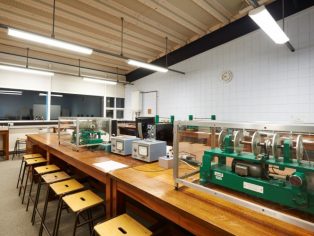 The School of Biological & Biomedical Sciences