Pellings, the multi-disciplinary construction and property consultancy has completed construction on the new Royal Borough of Greenwich Equestrian Skills Centre.

The Royal Borough of Greenwich Equestrian Skills Centre is also aimed at increasing opportunities and access to equestrian activity amongst the community, specifically deprived social groups, children, and the disabled.

Pellings, which provided town planning advice, building surveying and CDM co-ordination, and as architects designed the centre, had to do a series of Environmental Impact Assessments because the site is in Metropolitan Open Land. These included surveys of the site ecology, arboriculture surveys, negotiation with the Environment Agency on watercourses and research into UXB ordnance on site.

“We were delighted to be a part of a project that benefits the borough’s residents through elements that include increased employment, improved health, and social inclusion.”

The centre had to achieve BREEAM Excellent for all new buildings and BREEAM Very Good for all existing buildings to include photovoltaic Panels on the therapy centre roof, a sedum planted roof on the classroom building and with all buildings required to have good thermal performance.

The 2.5 acre Royal Borough of Greenwich Equestrian Skills Centre at Shooter’s Hill, was opened by Her Royal Highness The Princess Royal on December 5th 2013. Upon the completion of her tour of the facilities, the Princess Royal stated:

“equestrianism is a wonderful way of engaging young people and adults in sport. A centre such as this can open up opportunities for participation in a sport which were previously unavailable and widen access to the community as a whole.” 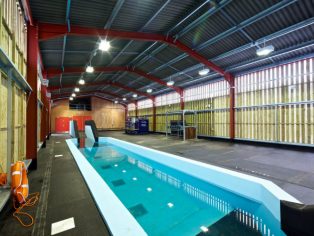