Nanotecture: Tiny Built Things, published by Phaidon on 1 March 2016, brings together 300 small works of architecture from the last decade.

It features pavilions, installations, sheds, cabins and tree houses, homes for dogs, cats and bees, and portable inflatable and flat-packed structures, each accompanied by a colour image and short text.

Nanotecture encompasses playful works from Paul Smith’s shed for the London Design Festival 2014 to Sou Fujimoto’s Bränden Bus Stop, as well as projects that respond to challenges of space, ecology and human relief.

These include the bespoke forested rooms of the eco-tourist Tree Hotel complex in Sweden and Winfried Baumann’s Instant Housing for disaster situations and the homeless.

The book illustrates how internationally established and emerging architects embrace the freedom to experiment with materials and design concepts when working on a small scale.

The Roof that Goes Up In Smoke (Overtreders W) is an illuminated hot air canopy powered by a wood burning stove that doubles as a cooker for the picnickers below. A dome of umbrellas built around a lamppost hosted a pop-up street party (Bucky Bar, DUS Architecten/Studio for Unsolicited Architecture).

The flat-packed design can be transported to disaster areas and erected within four hours. Other transportable structures such as Wheelly (ZO_loft Architecture and Design) and I-Gloobox (Georgi Djongarski) provide assistance to the urban homeless, confronting the basic human need for shelter and security.

A growing awareness of the ecological impact of the construction industry is a consideration for other projects in the book.

With the density of urban living increasing throughout the world, projects such as the Tree Hotel complex in Sweden attempt to impact minimally on their site and allow guests to engage with the natural environment as much as possible.

For Hut to Hut in the Western Ghats, Rintala Eggertsson Architects selected construction techniques and materials that maximise environmental responsibility, such as locally available timber and bamboo.

Greater attention is often focused on how materials are used in small-scale works of architecture, where the space is occupied more intimately.

Each project in Nanotecture is coded according to 66 predominant construction materials, from plywood and recently developed composites such as printed concrete and bio-plastics, to hula hoops and other repurposed objects. The book is organised into five chapters of progressively larger works: micro, mini, midi, macro and maxi. 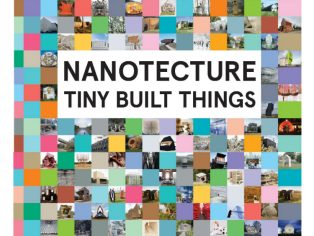