Brick takes a fresh look at the world’s oldest manmade building material, collating remarkable and beautiful brick buildings from around the world.

Published by Phaidon following the success of Concrete (William Hall, 2012), Brick is an insightful and often surprising look at a humble material which has been an architectural staple for centuries. Yet as William Hall points out, no illustrated books have been published on the subject for over a decade, suggesting that despite its ubiquity brick architecture is distinctly under appreciated.

As well as showcasing extraordinary early works of architecture, such as the strange remains of the Ziggurat of Ur (dating from 2100 BC) and the vast Baths of Caracalla in Rome (216 AD), Brick features some of the most celebrated architects of the twentieth century, such as Mies van der Rohe, Alvar Aalto, and Frank Lloyd Wright – for whom bricks were integral to his vision of an American vernacular. Equally striking and memorable works are featured by innovators working into the twenty-first century, such as Frank Gehry, Peter Zumthor, Kazuyo Sejima, and many lesser-known newcomers.

Arranged to promote comparison and discussion, the selected projects take the reader on a global tour of intriguing and inspiring structures: an American arts centre sits next to an English castle, a French war memorial is shown alongside a Russian cathedral, and a Uruguayan church next to a school in Burkina Faso.

Illustrated with extraordinary photographs, each project includes an extended caption providing a commentary on the building. An essay by the historian and BBC television presenter Dan Cruickshank sketches the fascinating history of this enduring building material. ‘There’s an alchemy about brick,’ he begins. ‘Through fire, a soft, ephemeral and ‘base’ material – mud – is transmuted into the hard, the eternal, and the beautiful.’

Brick is a handsome and informative visual exploration of a material that is often overlooked but is actually full of spectacular potential. 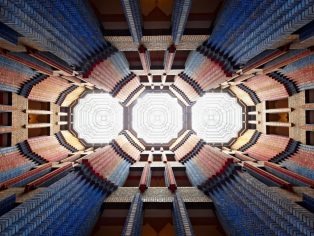 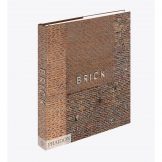 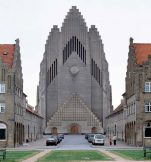