Phaidon to publish Grafton Architects, a timely overview of the pioneering work of the acclaimed Irish architectural practice

Grafton Architects has emerged as one of the most important and celebrated architectural practices of the 21st century. Founded by Yvonne Farrell and Shelley McNamara in 1978, this prestigious Irish architectural firm is one of the few internationally recognised practices led by female partners. Coinciding with the release of Grafton Architects this spring, the acclaimed duo will curate the 2018 Venice Biennale of Architecture under the theme ‘Freespace’ – only the second time in its history that the exhibition will have been directed by women.

Farrell and McNamara have lived, taught and practiced in Dublin, Ireland for forty years where they were born and grew up. This city forms the context, ground and foundation for their work, exhibited most explicitly by naming their practice after its first location on Dublin’s Grafton Street. Since then, the practice has built up a respected and dedicated following in the thirty years of working exclusively in their native land.

Experiential and innovative, Grafton Architects remain committed to making a profound difference to their clients lives through every project they undertake. This principled approach, along with the studio’s more recent evolution onto the international stage, allows their work to serve as an important example of transforming modern architecture while endeavouring to improve and enrich society. Working as a close team, Farrell and McNamara have designed and built several award-winning schools and architectural works for institutions and universities.

These include two additions to the Trinity College, Dublin; offices for the Department of Finance, Dublin; the Università Luigi Bocconi in Milan, which was awarded the World Building of the Year Award in 2008 and a gold medal from the Royal Institute of the Architecture of Ireland in February 2018; the Institut Mines-Télécom, Paris; the University of Limerick Medical School, President’s House and Student Accommodation, Ireland, and UTEC University in Lima, Peru, which won the inaugural RIBA International Award in 2016. Alongside public commissions, the duo have also built pioneering houses across Ireland, carefully weaving and stitching new structures into existing contexts to create a much lighter and colourful environment.

In this long-overdue study, respected architectural writer and critic Robert McCarter presents fifty of Grafton’s most defining buildings and forthcoming projects – including a new faculty building for the London School of Economics and Political Science; the School of Economics, Toulouse, France; and the Parnell Square Cultural Quarter project in Dublin – bringing to light their principled and moral approach. Grafton Architects features more than 350 images, compiling photographs and never seen before sketches, models and final drawings from the studio archives.

The first and only monograph to shed light on their acclaimed portfolio, Grafton Architects reflects McNamara and Farrells’ thoughtful forensic responses to people, landscapes and nature through architecture. A timely overview, this book will appeal to every architect, academic, student and those eager for a more comprehensive glimpse into this very talented, but incredibly understated, duo. 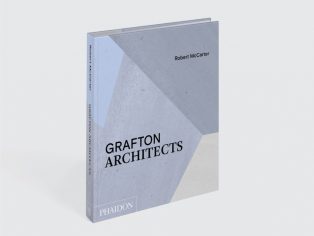