Tate Britain marks the 80th birthday of renowned British sculptor Phillip King (b.1934) with a display of six of King’s works from the 1960s in the Duveen Galleries. The display, which opens on 8 December, celebrates King’s significant contribution to late 20th century sculpture.

King, a contemporary of Antony Caro, played a vital role in changing the face of British sculpture. His dissatisfaction with figurative, expressionistic sculpture of the 1950s, and his exposure to the new American painting in the 1960s, led him to start experimenting with abstraction, construction, material and colour. The display will include key works from Tate’s collection made during this decade, including Genghis Khan 1963 and the important loan of Rosebud 1962 (private collection), his first coloured sculpture using fibreglass.

King’s use of innovative materials such as fibreglass allowed him to mould shapes and structures not feasible with plaster or other traditional materials. Influenced by Matisse, he was also a pioneer of colour – describing it as ‘no longer subservient to the material but something on its own, to do with surface and skin’ and used it to bind the separate parts of a sculpture together.

This rich combination of materials, techniques, forms and colour enabled King to create sculpture detached from conventional, figurative ideas. King also deferred from tradition by choosing to place his works directly on the floor, occupying a space alongside the viewer, rather than on plinths.

Phillip King was born in Tunisia in 1934 and came to England in 1945. He read Modern Languages at Christ’s College, Cambridge from 1954 to 1957. In 1957, he studied sculpture at Saint Martin’s School of Art before working as an assistant to Henry Moore. Soon after, King returned to Saint Martin’s to teach with Anthony Caro. During this time he became influenced by developments in American art and began moving towards new abstraction in sculpture. In 1990 King was made Professor Emeritus of the Royal College and was the president of the Royal Academy from 1999-2004. In 2010 he received the International Sculpture Center’s Lifetime Achievement in Contemporary Sculpture Award. He lives and works in London. 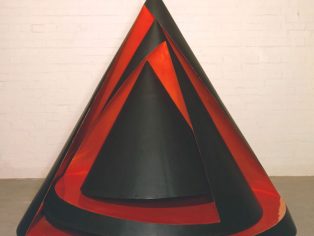