The Herfordshire school established Haileybury Almaty – the first British public school to ever open in Central Asia – in September 2008, adding an additional school in the capital Astana three years later.

Work on a new $5m kindergarten at Haileybury Astana is due to start later this year following a strategic review and feasibility study undertaken by the team at Pick Everard.

Paul Knifton, associate architect at Pick Everard, has been working on the project. He said:

“Haileybury is a very well respected school with former pupils including the likes of Rudyard Kipling and playwright Sir Alan Ayckbourn, and we are absolutely delighted to be working with them to deliver a brand new kindergarten in Astana.

“Initially we undertook a strategic review and will be delivering architecture services for the new build school, which presents a number of unique challenges due to its location in Kazakhstan.

“Temperatures in Astana range from minus 30 in the winter months and can top 40 degrees during the summer, so the school building has to be able to cope with such dramatic variations in temperature by housing all of the facilities normally required outdoors inside so that they can be used all year round.”

Pick Everard has a strong reputation in the education sector, having worked on hundreds of school and university projects across the UK – a key factor in securing the contract with Haileybury according to director Paul Rothera.

Paul Rothera, national director for architecture at the firm, added:

“During the last 10 years we have really grown our work in the education sector and now have a really strong track record in both schools and further education; in particular our work for independent schools has significantly increased.

“More than 30% of our company’s work is now in the education sector, and it is that excellent reputation and expertise that I am certain played an important part in securing the contract with Haileybury.

“This is a very exciting project for us for be involved in as we work with Haileybury to expand its operation in Kazakhstan.”

“Having worked with Pick Everard on the design on of our award-winning Sixth Form centre when I was Headmaster of Derby High School, I was very happy to renew my association with them recently.

“We have been very pleased with their input to date, which has resulted in a better footprint for the new Kindergarten with associated cost savings.” 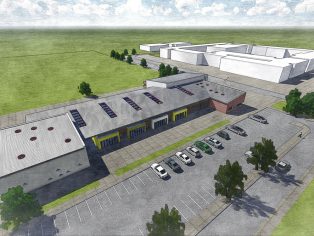