The firm, which was founded in Leicester in 1866, is involving its 450-plus employees across its network of 10 UK offices in a series of events and activities in recognition of this historic milestone.

Over the next 150 days, staff, their families and friends will undertake sporting challenges of varying degrees of difficulty as well as carrying out good deeds in their communities; all to raise money for charity.

Included in The Pick Everard 150 Challenge is a cycle ride from Inverness to London which takes in all the firm’s offices en route.

For those who prefer walking to cycling, the Challenge features a 10-mile walk around Leicestershire; where the firm has its roots.

Clients and business partners are also joining in the celebrations, with Pick Everard holding formal and informal events to thank them for their support at a number of venues over the next six months. And, in recognition of all their hard work, staff will be invited to a big party at a secret location when the 150 Challenge ends on 1 October 2016.

Everyone within the business has been encouraged to contribute suggestions as to how best to mark the landmark birthday, with a team of people representing all 10 offices put together to generate ideas.

“With such an illustrious history it’s important for us all at Pick Everard to mark this anniversary together and with our clients.”

“Our celebrations serve as a great catalyst for positive change as we reflect proudly on our historic past while at the same time embracing our vision for the future. The 150 Challenge also gives us the opportunity to create a legacy and support the charities close to our hearts.”

The 150 Challenge has taken 12 months to plan, with many Pick Everard employees putting in hours of preparation and training for activities such as the cycling event.

Pick Everard was first established by civil engineer and architect John Breedon Everard in 1866 at 6 Millstone Lane in Leicester. Samuel Perkins Pick later expanded the practice’s architectural capacity, with the business changing its name to Everard and Pick in 1888.

In 1918 the practice was renamed Pick Everard and Keay, later becoming Pick Everard Keay and Gimson on its expansion in 1923 before shortening its name to Pick Everard in 1991.

With offices across England, Scotland and Wales, the firm recently announced plans to strengthen its UK presence with a further office in Birmingham as part of its continued growth strategy. 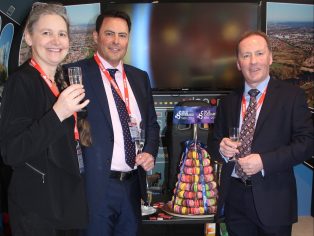