The Michael Uren Biomedical Engineering Research Hub at Imperial’s White City Campus was approved unanimously on Wednesday by Hammersmith and Fulham Council. The detailed design and construction can now be initiated for the pioneering new facility. A £40 million gift from Michael Uren OBE and his Foundation – the most generous donation in the history of Imperial College London – will help support its construction.

The 13-storey scheme will provide flexible accommodation for translational research initiatives at the interface of biomedical sciences and engineering. It will house research laboratories, an outpatient clinic, a 150-seat auditorium and a series of social spaces to encourage informal exchange of ideas. The integrated clinical facility will provide patients with direct access to innovations in healthcare.

“The Michael Uren Biomedical Engineering Research Hub will harness the expertise of engineers, scientists and researchers under one roof – to drive forward medical technology and bring direct benefits to patients. We’re delighted to have planning permission and look forward to continuing to work with the Council and the community as we realise this important step for our White City Campus.”

The building has a triangular plan which responds to the layout of the existing masterplan, while affording a highly flexible and efficient servicing strategy in which the laboratory and clinic spaces are served by interconnected plant on each floor. A field of vertical fins is set in front of the glazed façades, providing solar shading and privacy to the interior while lending the building a dynamic and distinctive image.

The BmE Research Hub is a key component of the university’s White City Campus, itself a major boost to the regeneration of the local area. Plans for the site’s first developments include publicly accessible green space, student accommodation, local retail facilities, a pedestrian cycle route, alongside the creation of thousands of jobs. 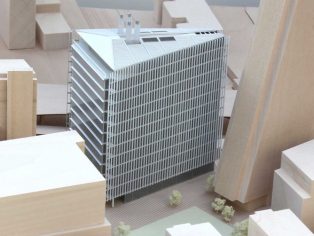