A residential project that will see the first housing built over the River Thames, has been given the go-ahead by planners.

Dartford Council has approved the final phase of the successful Ingress Park development at Greenhithe in Kent, that will see the construction of a 16-storey tower, a smaller apartment block and 20 townhouses on a new pier extending more than 30 metres over the river.

Ingress Park’s developer, Crest Nicholson Eastern, has built out the majority of the 1,500 homes already in occupation and appointed Broadway Malyan to design a neighbourhood heart to complete the settlement.

The new pier, which will be 190m wide, will replace a previous pier on the site, which was built to service a large paper mill supplying the newspaper industry, demolished in the 1990’s to make way for the new development.

The design creates a new riverside walk and a series of terrace viewing points to observe the nearby QE2 Bridge and the shipping along one of the UK’s busiest waterways to the east of London. Also to be built as part of the scheme is a launch slipway into the river for the new Cambrian Sea Scouts training centre, constructed over a platform on the edge of Black Duck Marsh.

The 16 storey tower curves along its frontage with the River Thames to maximise views and sunlight for the apartments, with extensive terraces providing views along the river towards London or towards the Ebbsfleet peninsular.

The shape also reflects the new semi-circular public space formed at street level, in combination with earlier phases of development. The tower will also provide space for shops, restaurants and cafes at street and river walk level.

John Dodson, who led the project for Broadway Malyan, said the design team had worked closely with marine engineers to develop a new pier platform to support the proposed scheme.

He said: “The design has had to overcome a range of technical and regulatory challenges, so we are delighted to be able to now move ahead with an exciting and unique project that is actively building new residential accommodation over the River Thames, as opposed to along its banks.

John said that the key to the new scheme’s success will be the completion of a landscaped circus, terminating the street network of this eastern half of Ingress Park, influencing the form of the new buildings and creating a vibrant new hub at the heart of the development.

He added: “The new landscaped amenity space will serve the Ingress Park community, both for regular shopping and entertainment, such as seasonal events and farmers’ markets.

“The links into the wider riverside environment and unique ecology of the semi-saline marshland of the Ebbsfleet Peninsular will bring many visitors, making the circus a key point on their riverside walking route and creating a tranquil place for people to enjoy the unique landscape.

“This final phase of Ingress Park will create a really vibrant residential hub on London’s doorstep, with the benefit of being situated within the unique river landscape of Black Duck Marsh and the Ebbsfleet peninsula.” 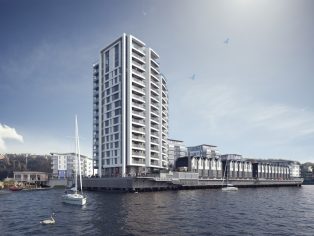 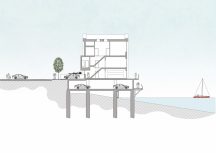 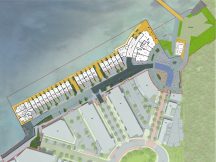