Planting the seeds of a successful green roof specification

The drive towards more sustainable buildings has led to an evolution of green roofs from specialist ‘eco- feature’, to much more mainstream specification. Whether the green roof is specified to help a building blend in to rural or semi-rural surroundings, to enhance bio- diversity or to gain BREEAM points, it can be a striking addition to a building that matures to enhance the structure’s character over time.

However, the success or failure of a green roof depends on an effective specification that considers not only the structure itself but the location, orientation, shading and climate of the site. Only by working with waterproofing and green roof specialists that can offer a proven roofing system along with the required level of horticul- tural expertise can a specifier be confident of a viable long-term result.

While it may appear that planting can be decided at a later stage, in fact it is impor- tant that these decisions are considered at the design stage as the roof build-up impacts on the planting possibilities. For example, wildflower meadows are a popular choice for large expanses of roof surface, but they need plenty of moisture, which means designing the roof to accom- modate the load and a greater depth of reservoir core and necessary growing medium required to keep the green roof healthy. Conversely, alpine planting needs much less water to thrive, which influences the load-bearing capabilities required from the roof.

Green roofs can also be incorporated in to a project as part of a SuDS design. Water stored to irrigate the green roof reduces the potential impact of new and existing devel- opments with respect to surface water drainage discharges. Again, considering the planting at an early stage means that the specifier is in a much more informed position to understand the level of water that will need to be stored or released from the roof. Where a traditional below ground SuDS system may not be possible, it’s worth considering a ‘blue roof’ i.e. one that is designed to attenuate rainwater rather than drain it off as quickly as possible. Blue roofs can significantly contribute to the SuDS requirements within a development by collecting and retaining rain fall within the actual roof structure before discharging it at a controlled rate. This is particularly benefi- cial on sites where available land is limited, such as urban areas, where installation of other attenuation systems such as ponds or underground tanks may not be feasible.

The effectiveness of the waterproofing membrane used to create a watertight barrier between the roof substrate and the green roof system is the most critically important element of the specification. The membrane should be flexible enough to cope with any post build ‘settlement’, tough and durable enough to cope with the load bearing requirements of the planting medium, and have a sufficiently long service life to make the green roof viable.

A common green roof design would typically consist of an inverted warm roof build up, applying the waterproofing system to the roof substrate, followed by the insulation, and then the green roof elements. This can add an extra layer of protection for the waterproofing membrane as it is cushioned underneath the insulation. However, the use of a reinforced liquid membrane system means that the water- proofing can be applied either below the insulation or above as in the case of a conventional warm roof. Any system
chosen needs to be FLL certified as root resistant so there is no risk of root damage to the integrity of the waterproofing membrane, even as plants mature and their root size increases.

Consulting the membrane supplier for technical support can help determine the right specification in this regard.

In terms of specification of the green roof planting itself, client preferences and aesthetics have a role to play, but a key consideration should always be the location and prevailing climatic conditions, as these govern the amount of light, heat, shade and moisture the roof will receive. The influence of surrounding buildings, which can also affect shading levels and exposure to winds also need to be taken into account. These factors should be assessed in combination to determine the viability of different types of planting.

Of course, no matter how carefully considered the planting specification, without proper maintenance post installa- tion, a green roof will not thrive. Establishing a maintenance plan and provi- sion for the associated costs need to be factored in at the design stage for the aesthetics and benefits of any green roof to last long term. 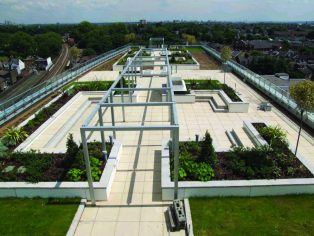 Factors including light, heat, shade from surrounding buildings and moisture should be assessed together to determine the viability of different types of planting Images courtesy of Kemper System