Tengbom was the winner of the hard-fought Design-S award in the Architecture category. The temporary market hall contributes to increased vitalisation of the area with more trade and more dynamism while at the same time reinterpreting the history of the site.

Design S is Sweden’s foremost and most widespread design award and we are proud and honoured that Östermalm temporary market hall was the victor in the Architecture category.

Historically, Östermalmstorg in Stockholm has been a natural location for trade stalls and the sale of fresh produce until this was prohibited by the city’s management for reasons of hygiene and administration. In 1888, the new market hall stood on the corner of Humlegårdsgatan and Nybrogatan, a trading location of the most modern kind. But the years passed and 128 years later, Östermalm market hall was in dire need of upgrading and development. While the reconstruction was ongoing, the city of Stockholm decided to erect a temporary building where trading could continue without the traders and their regular customers being affected too much.

This is the building that is now the recipient of the award from the Design S jury, with the following justification:

During the reconstruction of Östermalns Saluhall, the City of Stockholm decided to erect a temporary building. To accommodate all the functions, they needed to use the entire square. Turning the loss of the area into something positive was solved by careful architecture with lots of character. The building has a frame of prefabricated modules that are quick to install and disassemble. It is also possible to reuse the hall in another location. Wood as a material has many advantages, it is renewable and ecological, environmental and climate smart. The southeast corner has large windows to offer views both in and out of the hall. The upper part of the hall is clad in a semi-transparent corrugated plastic that lets in natural light and lights up like a lantern at night. The solutions have led to many permanent improvements, such as replaced sewer pipes and modern pneumatic refuse systems for the square.

Tengbom’s work, both with the temporary market hall and with the upgrading and renovation of the old one, contributes to the increased vitality of the area. Traders, customers and residents will all benefit. We see here the benefit of good architecture. Tengbom wants to be part of creating an inclusive and sustainable society in which respectful town planning, and good solutions and buildings all contribute to a better life for everyone.

Mark Humphreys, the architect in charge of the project said

“Temporary and experimental architectural solutions contribute to the city’s development and often provide unexpected positive effects, such as increased trade, new clients and more life and dynamism. We would also like to mention the city of Stockholm’s far-sighted courage to dare to invest in the big picture with such a project.”

Olle Henriksson, Project Manager for the City of Stockholm said

“It is of course gratifying that the architecture has attracted attention, as there was speculation that the traders would have run riot in a tent on the square while the regular food hall was being refurbished. The solution is a good one for everyone concerned. The traders have acquired attractive replacement premises that have been adapted to their activities, the customers find the traders in the same place as usual and the residents of Stockholm have acquired a new and attractive meeting place.” 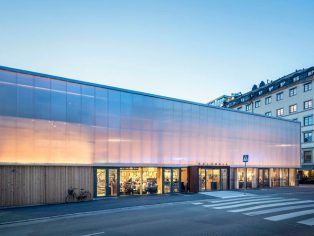