Space of Production Projects and Essays on Rationality, Atmosphere, and Expression in the Industrial
Jeannette Kuo (ed.)
The late nascence of the industrial building, together with its strong ties to changing technologies and its relative anonymity, liberated the architect from tradition.

Factory buildings have been a testing ground for inventions in construction for new expressions and the non-mainstream; while silos and reservoirs have been muses for architectural theory.

Whether large halls or vertical stacks, whether generic or highly specific, experiments in the industrial realm have produced perhaps the purest relationships between structure, light, and space that we would find in any building type.

The new book Space of Production is based on extensive research done by Atelier Kuo at Ecole Polytechnique Fédérale de Lausanne’s School of Architecture, and revisits spaces of production through seminal projects, text contributions, and studio explorations. Topical essays investigate specific aspects of the industrial building. The book features examples from the past 100 years with floor plans and sections as well as photographs.

Big! Bad? Modern: Four Megabuildings in Vienna
Stefan Gruber, Antje Lehn, Lisa Schmidt-Colinet, Angelika Schnell (eds)
Post-war modernist architecture and its quality remains a subject of much controversial debate. This new book is the product of a unique research, teaching, and exhibition project at the Academy of Fine Arts Vienna, dedicating a full year to investigate the highly controversial modernist architecture of the three decades between 1950 and 1980.

Big! Bad? Modern: reflects this diversity: Arranged by keywords derived from the featured projects, it provides easy access to the rich and comprehensive collection of materials and manifold positions, and opens up new perspectives. Essays by renowned authors such as Hermann Czech, Françoise Fromont, Harry Glück, Sabine Kraft and Michael Zinganel and a preface by Nasrine Seraji round out the book.

What Moves Us? Le Corbusier and Asger Jorn in Art and Architecture
Ruth Baumeister (ed.)
Le Corbusier (1887-1965) is one the most influential architects of the 20th century. In the Scandinavian countries, his influence is arguably most pronounced in the writings and art of the Danish experimentalist Asger Jorn (1914-1973). Their collaboration on Le Corbusier’s pavilion for the 1937 Paris World Exhibition sparked Jorn’s lifelong fascination with the great architect and with architecture more broadly as an inherently public form of art. At the same time, Le Corbusier began revealing his work in visual art and started to move from a rational, technological approach towards a more poetic, materialist approach to architecture.

Published in collaboration with the Museum Jorn, Silkeborg, What Moves Us? focuses specifically on the reception of Le Corbusier in Scandinavia, with the relationship between Jorn and Le Corbusier as a thematic thread. The book first highlights the architect’s change of direction and subsequently takes readers through his influence on the young artist. The book’s distinguished contributors explore the relationships that emerged among their artistic theories and practices, including Jorn’s later critique of Le Corbusier. Essays also explore the wider influence of Le Corbusier on Scandinavian architecture and urbanisation and consider Le Corbusier alongside the Danish architect Jørn Oberg Utzon and the Aarhus Brutalism movement.

Icelandic Lessons: Industrial Landscape. Teaching and Research in Architecture
Harry Gugger, Aurélie Blanchard, Barbara Costa, Lukas Lenherr
During the last decade increasing attention has been drawn to Iceland. Icelandic Lessons presents the results of a campaign to explore potentials that could emerge from the relationships and areas of conflict between architecture and landscape, urban and rural, culture and nature, artificial and natural, and human and non-human, rather than promoting growth, urbanisation and industrialisation, or upholding the concept of Iceland’s nature existing as a single autonomous object that should be kept intact.

Christian Menn: Bridges
Christian Menn, Caspar Schärer (eds)
Christian Menn ranks among the most renowned structural engineers worldwide. He continues the tradition of Swiss excellence in the construction of bridges and has, both as designing engineer and as a teacher, been highly influential for decades. Many of his designs have become landmarks admired for their elegance and stringency. Bridges offers a rich insight into Menn’s lifelong examination of the fundamentals of his profession, and it is also a comprehensive reflection on the art of structural engineering. 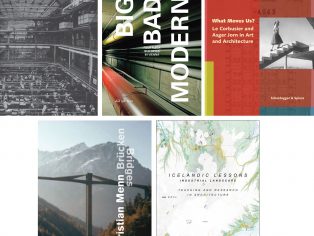 Space of Production Projects and Essays on Rationality, Atmosphere, and Expression in the Industrial Jeannette Kuo (ed.)

What Moves Us? Le Corbusier and Asger Jorn in Art and Architecture Ruth Baumeister (ed.)