A radical proposal to prefabricate complex junctions rather than simple components has won the BSRIA and Designing Buildings Wiki ‘Make Buildings Better’ competition which was seeking ideas to improve the performance of buildings in use.

47 per cent of UK carbon emissions are generated, or influenced, by the construction industry, 80 per cent of which are from buildings in use. If the performance of buildings does not improve, we are unlikely to achieve our emissions targets or the COP21 goal for keeping global warming below two degrees centigrade.

124 ideas were submitted, covering everything from networking groups of buildings to balance their energy use, to running buildings on algae.

Most participants didn’t think we need a raft of new solutions, but instead felt we should make better use of the ones we already have. Some of the most interesting ideas were about changing behaviour, with a general feeling that improvement will only come as a result of intervention, whether in the form of legislation, incentives and penalties, education or automatic controls.

The winning idea came from Tom Hughes, Director at architectural practice 2hD. Tom proposed that build quality could be improved by prefabricating complex junctions, rather than prefabricating simple components as we do at the moment. These would be produced to length and delivered to site pre-insulated, air sealed and finished. On-site work would then just involve filling in the areas between the junctions with timber, steel or concrete as required.

“This flips the current situation, in which the easy-to-produce components are made off site and the very difficult junctions are made on site, under less-than-ideal conditions. Our experience tells us that buildings leak air and let in water at the junctions, not in the middle of elements, so the quality control of factory production is being applied in just the wrong places.”

The runners up were:

·       Tamalee Basu – currently in the 4th year B.Arch programme in IIEST, Shibpur, India. She proposed that building management systems should progressively switch things off as design emissions limits are reached.

·       Jon-Scott Kohli – an associate at sports architecture and master planning practice Pattern Design. He proposed that buildings which emit carbon should be taxed, with the proceeds being paid out to buildings that are carbon negative.

·       Carl O’Connor – a building design engineer in Dublin. He proposed the development of an app that gives a detailed breakdown of a buildings’ energy consumption, proposes ways of reducing energy use and allows remote control of devices.

·       Aris Kapsanakis – who is from Greece, but lives in Hertfordshire. He proposed that we make energy saving competitive at the community level – fantasy football style.

Jayne Sunley, Knowledge Manager at BSRIA said: “We’re delighted with the variety and inventiveness of the entries submitted. Tom’s idea stood out as a genuinely practical and interesting way of tackling the performance deficit of buildings. So many problems occur at junctions, rather than within components themselves, it is an obvious place to focus attention.”

“It has been fascinating to see how radical many of the entries to the competition have been. People seem perfectly willing to contemplate the introduction of financial and behavioural pain and gain to force emission reductions through.”

Winners and runners-up can be viewed here. 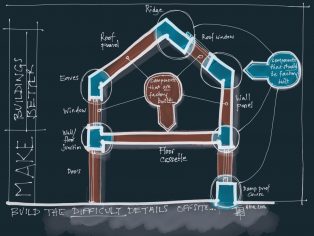