Repairs, refurbishment and water ingress by the sea

Once a popular honeymoon destination owned by Billy Butlin it is now the central building from which a development of luxury apartments takes its name.  The scheme has seen the refurbishment of the original structure and construction of four new build blocks designed in keeping with the former hotel.

Problems with the integrity of the waterproofing system that was originally specified for the project became apparent even before the scheme was completed, leading to a change of both roofing contractor and, eventually, roofing system.

Integrity Issues
Both the existing hotel building and the new builds have flat roofs and architect, Rolfe Judd, had specified a liquid waterproofing membrane. Unfortunately, the system selected was not robust enough to adhere seamlessly to the roof substrate and the assumption was made that the issue lay with the quality of installation rather than the suitability of the membrane.

The majority of the problems with the roofing material were around the upstands. While repairs using the same membrane seemed to address the issue briefly, the same issues recurred following the repairs.

Inverted Refurbishment
Having used Kemper Systems’ Kemperol membranes on a wide variety of construction projects in the past, Cawston Roofing was confident in recommending Kemperol V210, a cold liquid-applied waterproofing membrane.

The originally-specified membrane had been installed beneath the insulation as an inverted roof build up for the new apartment blocks. Cawston Roofing removed the paving slabs and green roof medium along with the insulation and, where possible, this was stored for re-use.

The company then prepared and cleaned the roof surface and, in the areas around the upstands where the failed membrane had not bonded, the team pulled off the damaged membrane.

The existing insulation, slabs and green roof medium were then reinstated to complete the roof.

Hotel Roof
The damage caused by the failed waterproofing membrane on the roof and balconies of the former hotel building was even more significant because the original roof build-up was not inverted.

The balconies were tackled first, with strip out of the entire roof build-up. Here, not only had the originally-specified membrane failed, but the insulation below it had begun to rot too.

Having completed the strip out, Cawston Roofing allowed the concrete substrate to dry on each balcony and the decision was taken to reinstate the build-up for each balcony as an inverted warm roof.

New insulation had to be cut to size and shape and this was done while the Kemperol V210 membrane was being installed so that the balconies could be completed as quickly as possible.

The team then moved onto the 8,500m2 former hotel roof, which comprises five ‘fingers’ with a central core. Water ingress around the roof outlets meant that the recently installed warm roof insulation was already sodden and the roof had to be stripped back to the vapour barrier.

To aid water run-off in the future, Kemper System designed a tapered Kempertherm insulation scheme, introducing a slight pitch to each section of roof. Cawston Roofing pre-primed each piece of board in an on-site workshop during the winter months to aid faster installation once the weather improved.

When weather conditions did improve, the Kempertherm sections were fixed to the substrate and joint sealed before application of the Kemperol V210 membrane began.

Holiday Heritage
Thanks to the replacement of the originally-specified waterproofing system with Kemperol V210, the building not only provides a stylish address on the coast that is warm and dry for residents but also protects a slice of the UK’s holidaymaking heritage and an iconic listed building. 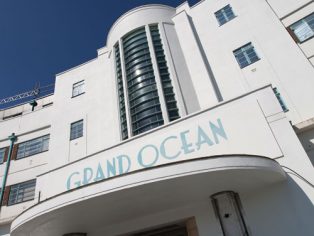