Resiblock Made to Order for Maidstone Public Realm

Resiblock, and their Commercial product Resiblock ‘22’ A.F, has been specified and now utilised at the Maidstone Public Realm project.

Following trials of Sealers/Sealants on Charcon Andover Washed blocks by Maidstone Borough Council and contractors Henderson and Taylor, Resiblock ‘22’ A.F was specified due its protection against food and drink stains, and darkened appearance.

The success of Resiblock ‘22’ A.F at Bedford Square in Tavistock, and at Guildhall Shopping Centre in Exeter played a key part in Resiblock’s recommendation of Resiblock ‘22’ A.F, as both sites experienced similar level of footfall traffic that is expected in the Maidstone project. 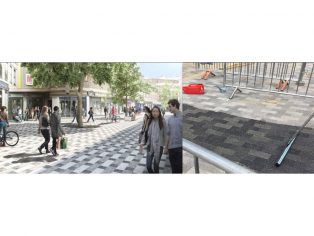