A giant resin bound Seagull crest welcomes B&H Albion football fans to the Amex stadium in Brighton. Paul Barber, Chief Executive of the Albion noticed a crest (albeit on a much smaller scale) at Manchester City and liked the idea and decided the club should have their own, but bigger and bolder to create a real sense of arrival for the fans. Clearstone was chosen for the project as they are a specialist resin bound surfacing company with expertise in producing custom paved logos.

The crest was created in Vectorworks CAD program, from which intricate templates were laser cut for the seagull, its beak and the lettering, which were then carefully pinned in place by Clearstone’s installation team. Then in-filled with white and blue RAL coloured pigmented quartz to match the team’s home kit colours. Finally a seal coat of resin was sprayed on the crest and anti-slip glass sand was applied as a finish. It took around eight days to complete.

And the reaction from the fans?

“Lots of people have been taking their picture in front of the crest. I have heard that it is already becoming an ideal meeting point for people on Match day… as you can’ t exactly miss it!” says Laura Collins, Projects Manager 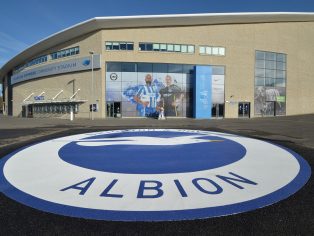