Construction work starts conversations, sometimes good, sometimes bad, but people always start talking. Construction evolves from the collision of political, economic, functional, logistic, cultural, structural, environmental and many yet unnamed and unforeseeable interests. Why? Because construction is exciting. It can be life changing, sky shaping and it can even change an entire city’s culture. You only have to look at the edifices we have to look forward to over the next few years.

In 2020 we can expect to see 101 George Street complete, as well as Versace Towers. Then in 2021 the Facebook HQ in London should be taking shape. KGX1, Google for King’s Cross, is also a rousing project that is starting to surface. Imagine the scale of these beautifully designed stores and offices and imagine if they were being built brick by brick, it would take years. Modular building is leading the way, supported by sustainable materials and magnificent creativity.

Gone are the days of static modular buildings made of glorified cardboard with square windows and wobbly doors. Modular means; separate parts that when combined together, form a complete whole, it’s that simple. And, in the world we live in today, the possibilities are just about limitless for what you can make those parts from. Due to this relatively straightforward approach, with modular, you have more control over design, pricing and quality.

Why modular is best for retail

When it comes to retail, efficiency and speed is often what makes money. Here’s a scenario; McDonalds acquire a site for a new restaurant, how long does it take them to make money? It takes as long as it takes to build a restaurant. The fastest way to do this? Modular. This scenario actually happened to McDonalds and so they commissioned the construction company, Elliott, to design, manufacture and construct a brand new two-storey Drive-Thru restaurant, the first of its kind in the UK.

The structure for the new restaurant was constructed off-site in a controlled environment to an extremely high specification and detail. This took just five short weeks which would be impossible for any other sort of construction. It was no small project either, the new restaurant can seat 130 people and has a Drive-Thru too. The outside materials included a brick slip plinth, stone tiling, Trespa panels and large areas of glazing in the dining areas.

The result of McDonalds choosing to go modular meant that the restaurant could start business in under two months of deciding on a location. The high quality structure that they chose is likely to last for up to 60 years too, quite the investment! This is the same for any retail store, choosing modular means choosing progress and unlike a lot of quick fixes, there’s no catch. 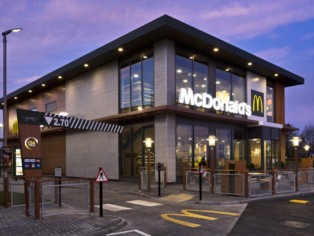 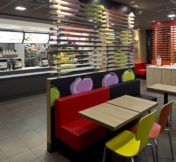