Live Works was named as a Civic Trust Awards National Winner in March and has been nominated for a British Construction Industry Award 2017. The project has also been shortlisted for the World Architecture Festival, RICS (Royal Institution of Chartered Surveyors) Awards North East, and Constructing Excellence North East.

Flanagan Lawrence’s Live Works has transformed a century-old gap on the Newcastle Quayside into a vibrant public place. The project comprises a new centre for children and young people’s writing in a converted Grade 2 listed almshouse; a vibrant, public ‘pocket park’, which reopens and revitalises the only remaining Georgian courtyard in the city; and a new office building generating rental income that will fund at least one play and education project each year for Live Theatre. 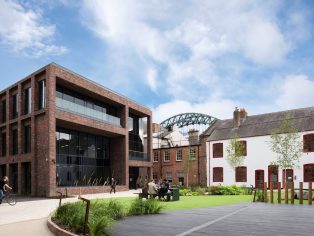