Southampton City Council has granted planning permission for the relocation and consolidation of Red Funnel facilities to Trafalgar Dock.

This is the first stage of a wider regeneration project for Royal Pier Waterfront by developer RPW (Southampton) Limited, a subsidiary of the Lucent Group.

The proposals at Trafalgar Dock involve a range of works on land  and in the water providing a new ferry terminal, marshalling yard, berths, linkspans and ancillary infrastructure including a four level decked car park above to replace existing ABP/Carnival surface parking.

In addition new vehicular, cycle and pedestrian access will be introduced which will provide improved connectivity to the ferry operations of Red Funnel and the Hythe Ferry.

The importance of this regeneration scheme has been recognised by the Solent LEP who regard the scheme as providing significant benefits to the economy of Southampton and the Isle of Wight.

‘This is a critical milestone in unlocking the Royal Pier site and a key step in the regeneration of the waterfront of one of the world’s great maritime cities.  We are more focused than ever on delivering a world class amenity for the people of Southampton.  We are very pleased that full planning permission has been granted and expect to start work on the site in Quarter Four of this year.

‘We will continue to work with our partners at Red Funnel, Carnival UK, the Hythe Ferry and Associated British Ports to ensure that the Trafalgar Dock design is to the highest standard and meets the needs of all its stakeholders.’ 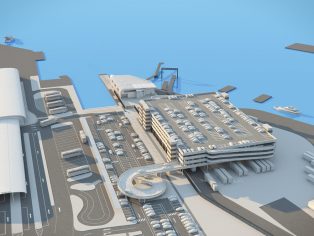