Plans have been unveiled to build a zero-carbon city as the first major construction project in the colossal $500bn NEOM urban development in Saudia Arabia, aimed at diversifying the country’s oil-based economy.

Prince Mohammed bin Salman announced that the linear zero-carbon city would link several urban centres, and be called The Line, extending over 170 km. It would house a million residents in “carbon-positive urban developments powered by 100% clean energy,” he said.

The project, which covers 10,230 square miles, runs adjacent to the Red Sea coast, and will have several zones, including ‘industrial’ and ‘logistics’ areas. It is planned to complete in 2025.

The project has reportedly been in preparation for three years, and its infrastructure alone, including new transport links, is thought to be budgeted at between $100bn and $200bn. The 10-year funding for the project comes from the King’s Public Investment Fund, the Saudi government, and “local and global investors.”

Prince Mohammed commented further on the sustainability goals of The Line: “Why should we sacrifice nature for the sake of development? We need to transform the concept of a conventional city.”

The NEOM project was launched by the Prince in 2017 as a key part of his Vision 2030 plan to reduce Saudia Arabia’s reliance on crude oil revenues.

Construction is planned to start in the first quarter of 2021, with the completed city expected to contribute $48bn to the kingdom’s GDP and create 380,000 jobs. 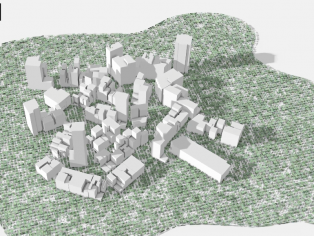