After opening its Shanghai studio more than 12 years ago, Danish architectural firm Schmidt Hammer Lassen Architects realizes its first library project in China, the 31,800-square-metre Ningbo New Library. Located 200 kilometres south of Shanghai at the centre of Ningbo, China’s new cultural hub, the library is a vital element in the ongoing development of the city.

Founded in 1927, the original Ningbo City Library held the largest collection of historic and ancient books in the region and attracted three to four thousand daily visitors. The new library, with its open, accessible architecture, aims to double the number of daily visitors and become the cultural heart of the community.

“We first came to Ningbo seven years ago when the Eastern New Town area of Ningbo was just beginning to slowly redevelop,” said Chris Hardie, Partner and Design Director Shanghai at Schmidt Hammer Lassen. “To see the library completed and part of not only the new ecological wetland landscape, but also the fabric of the local culture, is a rewarding milestone for our team.”

Ningbo New Library is organized around an 8,000-square-metre open “square” on the first level. It comprises the most popular library functions and collections including the main lobby, reader services, children’s library, 24-hour library, a library for the visually impaired, two lecture halls, a café, and the grand reading room. The ground floor is visually open on all sides, connecting it to an external public plaza and a landscaped ecological park and lake.

“We wanted to create a very legible building for Ningbo,” says Hardie. “The previous library was quite labyrinthine, so Ningbo New Library has an intentional spatial clarity.”

A landscape of contemplation

The spatial and architectural concept for the library creates a strong identity at the heart of the development. The journey to the main entrance over the wetland takes the user through a journey of escapism and contemplation where bridges, walkways, water, and nature blend as one sculptural landscape. A distinct and open facade welcomes visitors while casting a shimmering reflection on the lake.

The serene surrounding library landscape contains gardens where ponds form habitats for aquatic plants and animals and where the sky reflects in the pools’ surfaces. The landscape acts as a retreat for meditation and contemplation where people can disconnect from their busy daily lives and enjoy tranquility and relaxation.

Ningbo New Library is one of several Schmidt Hammer Lassen projects that have recently completed in Ningbo, China. The firm has also recently completed the headquarters for Ningbo Daily Newspaper Group as well as the sprawling Ningbo Home of Staff. 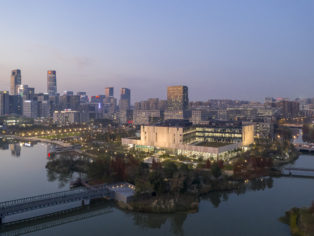