The National Railway Museum and Malcolm Reading Consultants has recently announced the five teams shortlisted in the competition to design the museum’s new emblematic Central Hall, which forms part of the museum’s strategy to become the ‘World’s Railway Museum’ by 2025

The 4,500 square metre Central Hall will bridge the space between the National Railway Museum’s two main exhibition halls, integrating the museum estate for the first time in its history and creating an appealing and compelling arrival experience.

The new building, which has a £16.5m construction budget, will also include reception spaces, as well as a spectacular 1,000 square metre gallery intended to showcase future acquisitions and innovative technology and introduce the museum’s world-class collection.

Together with the museum’s other Vision 2025 projects, including the new Wonderlab, the Central Hall will enable the museum to renew its physical presence and identity and be the cultural anchor for York Central, one of the largest city centre brownfield regeneration projects in the UK.

The shortlisted teams are (in alphabetical order):

“Announcing the shortlist for Central Hall marks an important milestone in the realisation of Vision 2025 — our exciting and ambitious £55m plan to transform and reimagine the National Railway Museum. I am looking forward to seeing the design concepts and sharing these with our visitors and the communities around us.”

“We were delighted and impressed by the strongly international response to the design competition. The shortlist is a refreshing, highly original list of accomplished studios known for their flair with cultural projects and we await with interest how they will respond to our brief in the second stage.”

“The National Railway Museum is focused on bringing exceptional architecture to this site and creating an engaging and inspiring experience from the moment the visitor approaches the museum.

“This is a very encouraging moment for architecture in the UK: a diverse set of exemplary small to medium-sized practices given the opportunity to compete for a commission that will be emblematic for this national museum and York itself.”

The five finalists will attend a site visit in November 2019 and will have three months to develop their design concepts, which will be displayed in a public exhibition in February 2020. The winner is expected to be announced in March 2020.

The teams were selected by a Shortlisting Panel led by Dame Mary Archer DBE, Chair of the Board of Trustees, Science Museum Group. No design was sought at the competition’s first stage — competitors made submissions based on past experience and team composition.

Each finalist team that submits a compliant design concept will receive a £30,000 honorarium at the conclusion of the competition.

Details of the competition jury were also released:

The National Railway Museum is ranked amongst the most popular attractions in the UK and welcomed 782,000 visitors in 2018-19. Located at the centre of York, the museum sits within a larger industrial site that was originally developed in the mid- to late-19th century by the North Eastern Railway Company. Surrounded by the remnants of this industry, the museum is today dominated by railway heritage and infrastructure.

However, York Central — a 45-hectare redevelopment comprising of a series of new city centre residential and business neighbourhoods — will transform the surrounding disused railway estate. This wider regeneration, which is expected to give a £1bn+ boost to the local economy, has already achieved outline planning consent, including an envelope for the new Central Hall.

The museum’s redevelopment will be completed in 2025, exactly 50 years after it first opened. The new Central Hall, along with the museum’s other strategic Vision 2025 initiatives, will enable the museum to welcome an estimated 1.2 million visitors annually.

The competition is being organised by independent specialists Malcolm Reading Consultants and is being run in accordance with EU procurement guidelines and the UK Public Contracts Regulations 2015. 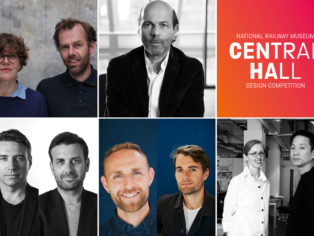