Selectaglaze’s expertise has assisted in creating more comfortable working spaces in a former chapel and a former outpatients building for Oxford University.

The University called on Selectaglaze to support the renovations of St Luke’s Chapel and the former outpatient building on the Radcliffe Observatory Quarter site. Both buildings directly face each other across a courtyard, and are Grade II Listed; the chapel dating from 1865 and outpatients from 1913.

As is a regular occurrence with older buildings, both suffered from substantial heat loss due to the inefficient original glazing. As the original windows were to be kept, the University sought advice from Selectaglaze, the specialist in the design manufacture and installation of secondary glazing, to help resolve the issues.

Selectaglaze subsequently installed 82 units across the two buildings using an array of products from its range to meet the required specification. In the chapel the stunning gothic arched windows posed an interesting challenge to Selectaglaze, as the planning authorities were particularly keen to ensure the aesthetic impact of the secondary glazing was kept to a minimum. Selectaglaze collaborated with the architects and designed solutions that would work with all the various styles.

In addition, the application of secondary glazing achieved a reduction in noise egress and ingress. Acoustic laminate glass will show further improvements particularly at higher frequencies as it provides further dampening. Ideally the secondary glazing should have a different thickness of glass to the primary window to avoid sympathetic resonance which will increase noise transmission.

Selectaglaze has been established for fifty years, and in that time gained extensive experience with working on all building types. It was granted the Royal Warrant in 2004 as a testament to the quality of its products. Selectaglaze works closely with clients to ensure their buildings are warmer, quieter and safer. 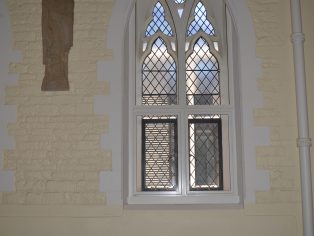