The Kingspan TEK Building System has helped to alleviate the pressure on an iconic build in Lewes, East Sussex, as featured on Channel 4’s Grand Designs.

Clad in CORTEN rusted steel, architect Sandy Rendel’s striking design blends the contemporary tastes of homeowners Stephen and Anita Yeomans with the industrial heritage of the site, a former loading bay for the chalk mined at the nearby quarry. However, flanked by the main road into the town and the River Ouse, the plot on which to build the home,  dubbed “The Gateway to Lewes”, was a mere 11 m wide.

In order to realise this adventurous aesthetic on such a narrow plot, the Kingspan TEK Building System was specified by Peter Carter, Director of Myriad Construction. The System comprises of structural insulated panels (SIPs), which can be pre-cut to each project’s specification. This bespoke approach, combined with the panelised system construction, allowed the construction team to establish a fast and predictable installation programme.

“As the Kingspan TEK Building System could be used in small modules rather than in pre-assembled elevations, the construction team had no issues manoeuvring around the tight site. In addition to saving time and therefore cost at the construction stage, the superior thermal performance and airtight jointing of the 142 mm thick System panels should also help to reduce the building’s long-term heating requirements”.

Owner, Stephen Yeomans, expressed his delight at the finished building, stating that

Both the Kingspan TEK Cladding Panel and Kingspan TEK Building System panels are now available in a 172 mm thickness, delivering U-values of 0.16 W/m2.K or better, without the need for additional insulation. The manufacturing facility where the panels are produced carries both FSC® (FSC®-C109304) and PEFC Chain of Custody certification. As standard, the OSB/3 facing of Kingspan TEK panels is PEFC certified at 70 per cent. 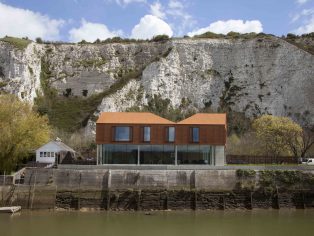