Al-Ula, a little-known region in Saudi Arabia has opened a beautiful new concert venue with a capacity of 500. Inspired by the natural beauty of a region that could easily be likened to a cross between Petra and the Grand Canyon, the venue – named ‘Maraya’, or Mirror in Arabic – is a feat of modern engineering.

Described as a masterpiece of the region, Maraya opens to host eight world-class performers as part of the Winter at Tantora festival, running now until February 9, 2019.

Prince Badr bin Abdullah bin Mohammed Al-Farhan, Governor of the Royal Commission for Al-Ula Governorate, inaugurated the Maraya building and praised the efforts of the Royal Commission for the province of Al-Ula, which aims at the sustainable development of the region and re-establishing it as one of the most important cultural and archaeological destinations in the country.

The Maraya building is an extension of the environment around it in design and beauty, but at the same time it has a comprehensive theatre equipped with the latest audio and lighting technology. The latest digital projection technology was used to describe a historical and visual story on the stage itself. Conceived by Massimo Foglatti and Florian Boje of Studio Gioforma the building is covered on two sides entirely with mirrors, thus enhancing the natural beauty of its setting rather than competing with it.

Maraya will host international artists including Majida El Roumi, Omar Khairat, Lang Lang, Yanni and Andrea Bocelli over the coming weeks. For more information and to book tickets to the festival visit www.winterattantora.com 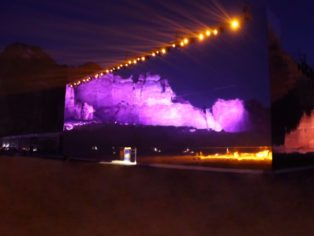