A stunning city-wide technical production is due to be put in Sydney, Australia, during the world’s largest lighting festival Vivid Sydney.

Australian video technology firm Technical Direction Company (TDC) said it was finalising the design of the visual illuminations project which will create a massive 11,500 m² of video projection on some of Sydney’s most iconic buildings and locations.

“We work closely with TDC to constantly break new boundaries in technology and to develop immersive experiences each year in the festival’s delivery of creativity and innovation.

“Vivid Sydney inspires, entertains and exemplifies the emerging technologies that are changing our world. It is a celebration that will blow away all who behold it.”

The company claimed it will bring some technical firsts to the festival, including audience-controlled video installation and the Laser-Dragon Water-Theatre in Darling Harbour where TDC will project onto a water screen mounted on a 13-meter robotic arm.

“All technical elements have been meticulously planned prior to the event. Only in Sydney will you be able to experience an event on this scale, size and technical complexity,” explained Michael Hassett, CEO at TDC. 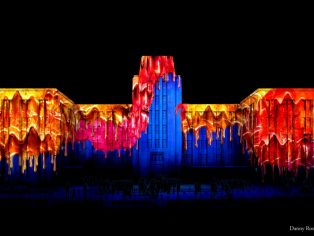