It is an ongoing battle with all companies to reduce waste, save costs and improve productivity. SureSet spent 2017 working on ideas to reduce their outgoings and waste on some of the biggest expenditures to their business.

Its safe to say that the recent Blue Planet 2 series shown by the BBC opened our eyes to some of the incredible natural wonders of the planet we live in, and the damage we are causing with our ‘throw away’ attitude and plastic pollution. The Guardian reported that humans have produced 8.3 billion tonnes of plastic since the 1950s with the majority ending up in landfill or oceans. It was also reported by the Blue Planet 2 film crew that in the five years of creating the series there was rarely a dive that plastic pollution wasn’t evident. Clearly things must change, and everyone can do their bit.

With SureSet’s ISO 14001 accreditations and commitment to being as eco-friendly as they can be, they are always looking for ways to improve our processes to minimise waste, with one of our biggest non reusable items being the resin tubs. Plastic tubs and the use for them have a negative impact on the environment by their production methods, by way of transportation to SureSets premises and then onto sites. Haulage is a major user of energy, and burns most of the world’s petroleum. This creates air pollution, including nitrous oxides and particulates, and is a significant contributor to global warming through emission of carbon dioxide for sector.

Another issue faced is with the disposal of the tubs once they have mixed our resin, although the resin will have no adverse effects on nature and the environment, once the tubs are contaminated with inert cured resin they cannot simply recycle them, they pay to get them taken away and specially disposed of.

This issue has been one of our priorities for a number of years and many ideas have been passed around and tested for viability. In early 2017 there was a eureka moment and it was discussed about creating a vehicle to transport the resins to site in bulk where they could then dispense and mix in situ, thus almost eliminating the tubs from the installation process.

The SureSet technical development team worked hard throughout the year to source suitable products to make this vision a reality, and in September of last year the project came together. The van can transport enough resin to install 400m², which is more than enough to cover most residential projects installed. Over the course of the year could save the company in the region of £25,000.

Although this doesn’t completely solve the problem it has allowed our installation team to significantly reduce their waste, and having proved a huge success SureSet look to implement the vehicles on a larger scale in the future. 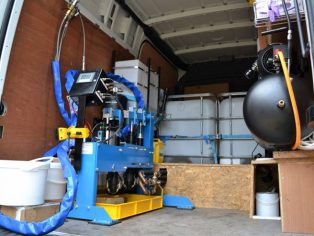