Talking sewers and the legislation shaping our infrastructure

In 2011, regulations came into play that would see the maintenance of private sewers become the responsibility of water and sewerage companies. Damian Whelan at Xylem talks through the heritage of our sewerage system, the importance of the Sewers for Adoption initiative and the implications for architects

Water availability, treatment and sewerage are not new concerns, with references dating back to the 19th Century. In fact, the water networks and sewerage disposal systems we have in place today came in force under the Public Health Act 1936, under which all sewers in existence on 1 October 1937 became public. Our current sewerage systems, particularly in the capital, were actually constructed in the 19th Century under engineer Sir Joseph Bazalgette.

The system was world-leading at the time as Bazalgette designed and constructed six main interceptor sewers to connect with the existing sewers and pumping stations, across London, totaling almost 100 miles in length. While much of the sewage could travel by gravity, the development also saw the construction of a number of new pumping stations to help ease the flow in some areas of the city.

In the next decades, a series of further improvements were made, including the provision of private drains and sewerage for the majority of UK homes. Move forward a century and under the Public Health Act 1936 section 24, all sewers in existence from 1 October 1937, became public. Yet from 1937 onwards, the rules changed and any built after that date, serving a single property, were known as private. It is due to these changes that many are confused about the rules and regulations surrounding new and existing buildings.

Changes to the regulations and adoption

To help clarify matters, under section 42 of the Floods and Water Management Act 2010, UK government legislated for the mandatory adoption of all new sewers and lateral drains. Further detail was then published in the DEFRA document entitled – ‘the private sewers transfer regulations’ in 2011. It was within this document that DEFRA highlighted that a large number of people are at a disadvantage by their responsibility for their private sewers; paying both the water and sewerage companies for services while also managing the upkeep their private sewers.

Labelled ‘unfair’ by DEFRA, the regulation would ensure the most comprehensive solution to the problems associated with private ownership; namely the burden of maintenance and repairs on the systems.

Private pumping stations form an important part of the drainage regulations and it’s important to consider two key elements; for consultants and framework partners working alongside water utility companies they will be advising on adoptable stations and upgrades. Architects however will be involved in new Sewers for Adoption designs that will need to meet the current standards set by the adopting authority.

The transfer of pumping stations has been progressive over the last four years, with the final deadline being October 2016. In general terms, a packaged pumping station would not be suitable for safe and serviceable upgrades commissioned by the Water and Sewerage Companies but, would be suitable for replacements or for new type one and type two pumping stations for new housing developments, in compliance with Sewers for Adoption guidelines that meet the required standard for the adopting water authority.

Simply put, before a housebuilder or developer makes a connection to the public sewer or in fact, creates a new drain or lateral drain – they must establish an agreement under section 104 of the planning act, with the local water and sewerage authority.

Therefore for architects or consultants and even water companies, that are unclear about the changes and appropriate solutions to meet the regulations, some good advice advice would be to consult experts. For example, some expert companies can refurbish, design and deliver a Packaged Pumping Station that not only conforms to the standards required for pipework, valve layout, pump types, level and control specifications, but also benefit from having a patented design and quality assurance.

While the changes over the last four years may seem numerous, the fundamental elements of the directive ensure that the UK’s water and sewerage systems remain closely regulated and, that more importantly the burden on customers is reduced. 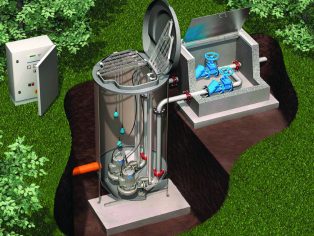