Furniture and products: shortlist announced for The 2015 Wood Awards

Some of the UK’s best new furniture and product designs in wood have been revealed as the Wood Awards’ shortlist is announced. Four bespoke designs, three production designs and three student designs have been selected by the judges led by Max Fraser, design curator and author. All of the shortlisted projects will be on display at 100% Design stand L722, 23rd-­‐26th September at London Olympia. The winners will be revealed by host Tom Dyckhoff at the 44th annual Wood Awards ceremony at Carpenters’ Hall on 10th November.

The Wood Awards are the UK’s premier competition for excellence in architecture and product design in the world’s only naturally sustainable material. The Awards aim to recognise, encourage and promote outstanding design, craftsmanship and installation using wood.

“It’s exciting to be part of this important awards process and even more exciting to see the extremely high quality of work that comes through. The UK is producing great design in wood, and this year all the judges were especially delighted to view work from the new student category.”

Endgrain showcases the possibilities provided by dying wood instead of painting it. From the most densely coloured areas, benches and stools emerge with their legs seemingly growing like tree trunks from a new indoor landscape. An example of this process is illustrated in the historic space of Chatsworth House where Endgrain was fitted as a grid-­‐like wooden floor creating coloured pathways through the gallery.

Staining the wood all the way though leaves the wood consistently saturated, and when Endgrain gets dirty or fades in the sun, removing or sanding the layer will make it look new again. The idea for the timber soaking came from xylem, the water-­‐conducting tissue that is found in trees and which facilitates the transportation of nourishment through the roots and into the remainder of the plant.

2. FROM GREENWICH TO THE BARRIER AND PERPETUALLY AJAR

An unmatched pair of collecting cabinets, one with a multitude of drawers, a fall flap and vertical tambour; the other with a cedar-­‐lined cupboard, small drawers, and a fall flap. The solidity of oak is supported on visually light maple leg frames. Maple also provides for bright white drawer interiors. Cedar is incorporated as a reminder that we encounter furniture with all of our senses.

3. GETTING AWAY FROM IT ALL

Getting Away From It All uses wood to create an exquisite, cocoon-­‐like, private workspace designed specifically for Sir Terence Conran. The pieces are made from American red oak and cherry, chosen because they are little used, less popular woods.

The design comprises a desk between two monolithic bookcases, enveloped within curved, woven screens. The woven screens are made entirely from red oak. The curved frames were steam-­‐bent into arcs. The panels filled with woven, band-­‐sawn strips of the oak, after time spent soaking in the River Kennett at the foot of Sir Terence’s garden in order to make them supple.

The bookcases and the desk are made entirely from cherry and feature sliding doors, dovetail joints, an entirely wooden tambour and a secret compartment.

Neal was invited to architect Zaha Hadid’s office to work with her design team, using the company’s modeling software to design VE-­‐SEL. From this came the idea of extruding the form along one of its axis with a slit opening at the end. Neal was interested in the idiosyncrasies of traditional hand processes such as a hand-­‐thrown pot or a raised piece of silverware, and how simulating these could be achieved through digital imitation. The vessels were made in two parts on a CNC machine during a week-­‐long stay at Benchmark.

1. A STOOL FOR THE KITCHEN

The pair of kitchen stools is made from American Cherry designed in collaboration with architect Alison Brooks. Brooks chose designer Felix de Pass to respond to her brief for a kitchen stool that was ‘the right height for a kitchen counter and that is quiet, clever and beautiful’; a product she was unable to find for her own family home and also for specifying to clients in her architecture studio’s residential projects.

The core requirement of the stool is that it is usable from every angle and accommodates an everyday, dynamic perching and hop on/hop-­‐off movement at about 650mm height. A central column and raised foot ring is used to free up as much space as possible under the seat, ensuring the user’s legs and body are not interrupted. The turned wooden top that is slightly dished and has rounded edges enables comfort and invites the user.

A second lower stool at 450mm high, for use at a table rather than kitchen worktops/island units was also added to the collection.

The stackable Aero Trestle Table was designed as part of a wider collection of furniture for the Edinburgh Sculpture Workshops and their new purpose-­‐built facility in Newhaven, Edinburgh. The aim of this commission was to develop a collection of designs on site at ESW which were capable of being produced in small quantities in the workshops themselves, before being put to use throughout the new ESW building.

Local Scottish Ash was used for the trestle legs, a material with an attractive and varied figure, yet pale in colour. A simple and economical plywood table-­‐top surface edged with the same solid Ash lipping, unifies the aesthetics of the piece while protecting vulnerable plywood edges from delaminating and splintering. Two narrow bands of rubber webbing set in the underside of the tabletop provide a safe, non-­‐slip contact with the trestles themselves.

Through the Alpha chair, Neil has explored the use of CNC technique as a high-­‐production tool rather than a prototyping technology. Additionally, the design utilises digital sculpting, taking away the reliance on moulds. By adopting contemporary digital processes of design and manufacture, the Alpha chair takes on a smooth appearance in contrast to the more traditional joinery of chair design where each element is exposed.

The End Grain stationery accessories collection was inspired by the wooden floor in the Barbican theatre. The surface pattern of the floor reflects the nature from which it was derived. Designer Simon Qiu’s aim is to introduce this mix of nature and man-­‐made beauty and apply it to functional, everyday products accessible to all.

Handmade from sustainable hardwoods using traditional techniques such as bridle and tenon joints, this chair was inspired by the architectural forms of Alvar Aalto and designed to focus on structure. The designer’s aim was to make a seat suspended inside a frame, similar to the inside/outside of a building. It has the feel of an armchair, but is light in its structure.

The Throne Stool and Pew Stool were made as part of a design project that aspired to reinvent traditional timber details with the constraints of using conventional tools, techniques and materials. The stools are a reinterpretation of the archetypal finger joint but instead of two plains intersecting with fingered edges, one of the plains is made up of many intersecting batons creating a v-­‐shaped seat.

Even though the stools are light and they are immensely strong, taking advantage of the strength and flexibility of European Beech. Inspired by Scandinavian heritage, the designer has soaped the wood to produce a natural finish that celebrates the raw qualities of the material. 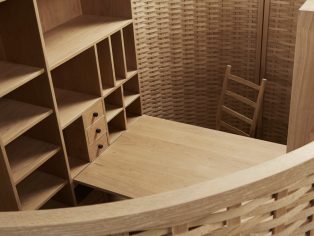