Developed by St John’s College, in partnership with Turnstone Estates, The Maurice Wilkes Building, situated at St John’s Innovation Park in Cambridge, is a stunning building that is designed to provide between 3,982 sq ft and 27,014 sq ft of prestigious Grade ‘A’ office accommodation arranged over five floors. The building is named after computing pioneer Sir Maurice Wilkes, who helped design the electronic delay storage automatic calculator or ESDAC, one of the world’s first computers, during his time working at Cambridge University in the 1940s. As is befitting of its namesake, the building is modern, forward-thinking and stylish in design.

The building was the creation of BCR Infinity Architects, who were commissioned to design this speculative office on the ‘toe’ site at the southern-most and prominent end of the St John’s Innovation Park, which is ideally situated on the main north eastern artery into the city. The building’s location means that it has two very prominent approaches and the architects set about embracing this prominent location through competent design of the building’s form and orientation. Visually impressive, the building is also extremely efficient and flexible, with a stacked floor plate that maximises the available office space. A top floor covered roof terrace also enjoys views back to Cambridge city centre, whilst its tensile canopy offers cover, solar shading and sculptural relief to the rational and efficient elevation.

A best-in-class office building obviously required the same of its construction materials, so BCR Infinity Architects chose ALUCOBOND® PLUS for the external façade, which was screwed in to place. In fact, some 3,000 m2 ALUCOBOND® PLUS was chosen for its superb properties – flexural rigidity-to-weight – compared to many other construction materials, as well its proven suitability across a whole range of projects including private homes, retail, public buildings, corporate headquarter and offices.

To maximise impact and reflect the building’s premium offering the ALUCOBOND® PLUS panels were specified in 500 Silver Metallic and 504 Bronze Metallic finishes, which complement each other to great visual effect. Fabrication was undertaken by Argonaut and installed by Middlesex Facades.

Such is the impact of the building that all space was let prior to completion, with the likes of PwC UK and cyber security pioneers Darktrace having moved in and will reportedly be joined by other innovative and high-technology companies in the near future. 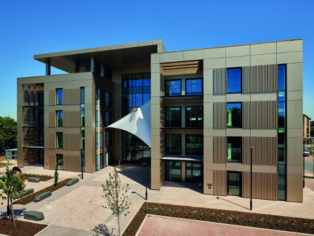