One of the UK’s top construction companies is now on-site at the University of Huddersfield, beginning work on a £27.5 million addition to the campus that is destined to be one of the most striking structures in the region. The new building will be home to the Law School and part of the School of Music, Humanities and Media.

The firm, Morgan Sindall, has landed the contract to construct a new six-storey home for the University’s School of Law and part of the School of Music, Humanities and Media. It will be adjacent to the Creative Arts Building and the most recent addition to the campus, named Student Central.

Overlooking the town’s Shorehead roundabout, one of the most important road arteries in Huddersfield, the new Law and Humanities building was designed by the Huddersfield-based architectural firm AHR and has already been hailed as iconic.

The building will be completed and ready for use by the start of 2017.

His Royal Highness The Duke of York – who is now Chancellor of the University – laid the foundation stone for the new building when he paid a visit in March.

Morgan Sindall – which is assessed to be one of Britain’s top ten building contractors – has previously carried out specialist refurbishment projects at the University of Huddersfield, and in addition to its work on the new Law and Humanities building it has also been awarded a new contract to carry out a major new development at the University’s Institute of Railway Research.

The architects AHR also have an established relationship with the University, having designed the Harold Wilson Building and refurbishments of the West Building and the historic Ramsden Building. 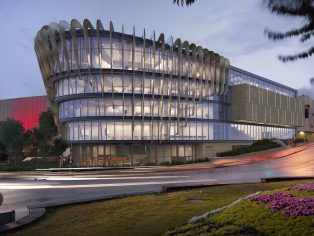