Whilst many of the 8.8 million viewers of the latest episode of BBC’s Sherlock will have been enthralled by the encounter between arch villain Charles Magnussen and Sherlock Holmes, it would seem that the house featuring in the last instalment has received almost as many column inches.

It is highly unlikely that Benedict Cumberbatch will ever be upstaged but the Winter Gardens at the £30m Swinhay House, masquerading as ‘Appledore’, came pretty close. I doubt that when the client, engineer Sir David McMurty, sat down with his architects, Roberts Limbrick, to plan the project he expected to see SWAT team helicopters to be landing on his lawn aiming machine guns at Benedict Cumberbatch, Martin Freeman and Lars Mikkelsen as they stood on the steps of his conservatory

The house itself was constructed under somewhat controversial circumstances. The government of the day had temporarily relaxed planning and building regulations within the green belt on the proviso that the new build home was of significant architectural interest. The project came within that particular window prior to the act being abolished but the building is certainly architecturally interesting both in its design and perhaps more-so its materials.

The whole ethos of this project from inception was high quality engineering and functionality where ‘Can’t be done’ was never an option for the architect or any of the contractors. The ‘Conservatory’ does in fact house a ‘Winter garden’ so the well documented issues such as Solar Gain and Insulation were interwoven into the whole fabric of the building using a combination of both natural and hi-tech mechanical solutions to combat these problems.

Whilst many architects may be presented with a fairly tentative brief this was certainly not the dilemma faced by Aaron Terry of Roberts Limbrick Architects. The client had sketched out the conservatory which in simple terms was akin to a Rugby ball profile curving in both planes. The many stipulations included no internal columns, despite being the length of a 5 a-side football pitch, and that all of the profiles within the roof framework were not to be any larger than 150 x 100mm. At its highest the conservatory reaches to 9.7 metres providing a Atrium space for three storeys of the main house at one end giving stunning views of the interior garden space. The glass facade includes triple glazed units 3.5 metres high.

The combined glass specification with ultra low UV targets , along with the argon filling and blinds within sealed units were beyond even the likes of Saint Gobbain and required sourcing from continental Europe. Whilst a whole raft of computerised climate control systems were employed, the building included a more fundamental approach with regards to wall thickness. The 700mm thick wall profiles may well have been akin to Roman specification and the tried and trusted method offered a substantial contribution t retaining an ambient constant temperature within the conservatory.

Both prior and during the 30 month build programme the client and architects were trawling the great and good within the UK Construction sector but the understandable refusal of both parties to lower their standards to meet availability eventually bore fruit. MERO-SCHMIDLIN bestride the continent and Asia as part of the privately owned TSK group. With the UK office in Camberley backed with hi-tech manufacturing in Germany, Switzerland, Italy France, Dubai, Kuala Lumpur & Singapore, MSUK are able to offer bespoke envelope solutions to meet the exacting standards readily available outside the UK. A few telephone calls and it became apparent to the architect and client that a company with both a bespoke ability and bespoke attitude did exist here and the journey continued.

Having seen a number of large span MSUK glass roofed structures in the UK and in particular Italy, it became apparent that not only could they deliver the project but also that MSUK are very familiar with working with partners from all corners of the continent. German Glass and Scandinavian Sealed Units joined a diverse range of continental products such as cladding, ventilation and computerised building control and were coordinated on site by MERO-SCHMIDLIN who produced a whole raft of structural and design drawings to prove that the demanding technical engineering requirements of the client could be achieved. The undulating facade, interfacing on to a hill and curved walls of the house created a huge challenge but fortunately MERO-SCHMIDLIN have a vast experience with such complicated geometry in both roofing and facades.

The ultra high performance glass was sourced in Germany and assembled, complete with internal motorised blinds in Scandinavia. it is to the constant chagrin of the whole team that much of the material specification to meet the clients, albeit exacting, standards were beyond the capability of UK manufacturing. The resulting U value of the glazing was just 0.6 W/m2k and was directly fixed to the primary structure using a hidden toggle fixings.

Whilst the resulting building exceeds almost all of the UK’s Green & Sustainability criteria the initial process could have been far ‘Greener’ had the high levels of construction expertise been available on the mainland.

The fears from the UK manufacturers included a sagging roof, due to lack of internal support, and wholesale water ingress were completely unfounded. Of course with any bespoke project there are bound to be complications and this project had its fair share along its course but the ‘can-do’ attitude of the whole MERO team enabled a very exacting client to be completely happy with his project and it certainly meets the ‘Significant Architectural Interest’ remit.

“The building works incredibly well as apart from the build itself, the biggest challenge was keeping the interior temperature within the parameters needed for the Winter Gardens. With the mix of opening vents at the summit of the roof and the electronic blinds within the glazing, this has been achieved. The same glazing specification has been used throughout the whole building, and the success of the glazing specification became apparent to me when I ventured up to the Panorama Room in July. The Panorama Room as its name suggests is a high level viewing room with 360 degrees of glazing, and on this day the inside temperature was in the low 20’s whilst the outside temperature was over 30 degrees.

“The fears from the UK manufacturers included a sagging roof, due to lack of internal support, and wholesale water ingress were completely unfounded. Of course with any bespoke project there are bound to be complications and this project had its fair share along its course but the ‘can-do’ attitude of the whole MERO team enabled a very exacting client to be completely happy with his project and it certainly meets the ‘Significant Architectural Interest’ remit.”

As the finished project admirably demonstrates, constructing the Winter Gardens at Swinhay House was far from elementary. 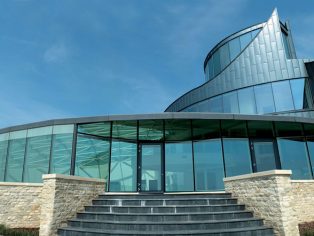